There may not have been a full quota of teams in action but it was nevertheless another busy weekend of action for players at various levels of the Cliftonville Girls Academy.

Under-9s ace Lily McCrea (pictured) was one of a number of star performers for the Reds, who also toasted a hat-trick hero at Under-13 level in Rhiona Brennan and saw Holly Saunders net twice for the Under-10s. 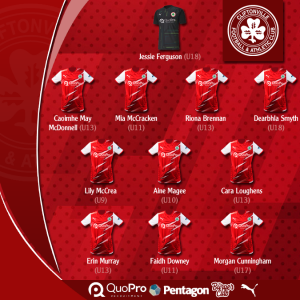 Under-9s
Hailey McAllister and Holly Delaney may have been on the scoresheet but it was Lily McCrea who stole the show with a sublime performance in the Irish FA Small-sided Games Development Programme encounter with Barn United.

Under-13s
A hat-trick from Rhiona Brennan inspired Cliftonville against Magherafelt Sky Blues at Girdwood, where Emira Rapalyte was also on the scoresheet.

Under-14s
Amy McBride may have been the Reds’ sole goalscorer against Carryduff Colts, but Caoimhe May McDonnell and Cara Loughens received acclaim for fine personal contributions.

Under-17s
Aquinas provided the stage for the tie with Comber Rec, against whom Aoife Kavanagh netted twice alongside finishes from Hannah McEntee and Emma Callaghan.

Under-18s
Dearbhla Smyth was rewarded for a hard-working display when she was on target against Derry City at Ulidia.