Connoisseurs of the beautiful game are never shy to catalogue the plentiful differences between football from yesteryear and the sport we know today – but it’s doubtful that events at Solitude on May 20, 1982 would be permitted in the modern era.

Today is the 38th anniversary of Cliftonville hosting Middlesbrough in John Platt’s Testimonial and, though it’s not uncommon for guest stars to make appearances on such occasions, very rarely do you see examples of seasoned professionals mixing it with semi-pros less than a month before playing in the World Cup.

That, however, is precisely what happened when Northern Ireland captain Martin O’Neill joined team-mate Gerry Armstrong in stripping out for the Reds against a Boro side – including international goalkeeper Jim Platt, brother of John – that had drawn 0-0 with First Division Champions Liverpool just 48 hours earlier.

Though Armstrong remains revered by NI fans for the historic goal he would register against Spain a few weeks later, it’s arguable – to those of a Cliftonville persuasion, at least – that his strike for the Reds against Middlesbrough was his most meaningful finish of 1982.

His contribution to the occasion did not end there, though, because in scenes reminiscent of Billy Hamilton’s famous run down the flank during that clash in Valencia, Armstrong would delight the Solitude crowd when (with the English visitors 2-1 up in the closing minutes) he set off on a lung-busting run in front of the Main Stand before delivering the cross that saw Platt nod home the equaliser at the Cage End – his unofficial 100th and final goal for the Club.

Exactly four weeks later, both O’Neill and Armstrong were in the starting XI for Northern Ireland’s opening game of the tournament (a 0-0 draw with Yugoslavia in Zaragoza) which would arguably overshadow the night they famously turned out for Ireland’s Oldest Football Club. 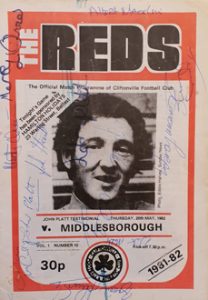 That particular occasion however, was all about Platt, who had been forced to retire from the game after sustaining an eye injury in an accidental clash with his good friend and fellow Solitude legend, Peter McCusker.

The Matchday Programme produced for his Testimonial declared that “the man whose goals brought Cliftonville back from the dead as a Club deserves as much support as possible” – and he certainly got it from a grateful Red Army, who continue to worship him to this very day.