He’s charted more than 141 years of Cliftonville’s history but now the Club’s Heritage Development Officer needs your help to bridge an unexplained gap in the archives.

Though tomorrow’s County Antrim Shield first round fixture represents the Reds’ ninth official encounter with Knockbreda, the sides did meet in a 1995 friendly of which there is no known record. 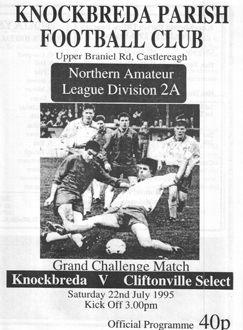 The game played on the Upper Braniel Road was the first engagement between Cliftonville and Breda, all of whose subsequent encounters have come in the last decade.

The Reds claimed four friendly wins alongside one draw and one defeat between 2010 and 2015, while the only two competitive clashes between the teams have come in the first round of the Shield, including last season.

It is, however, details of that friendly fixture 25 years ago that remain elusive and if you were there or know anything about the day – including the result, Cliftonville’s squad and scorers – Heritage Development Officer Paul Treanor would be very grateful for any information.