Not many teams can purport to have found two different ways to exit the same competition in a single season but it will come as no surprise for our supporters to learn that Cliftonville did just that back in 1951/52.

With the previous term’s County Antrim Shield Final having been delayed, the Reds duly slipped to defeat in that before suffering an early departure when the tournament began for real.

Such feats probably summed up Cliftonville’s exploits during a largely miserable campaign that was potted with George Ferrett (main image) and his men banking the odd eye-catching result out of the blue.

Continuing a retrospective series examining noteworthy seasons in the Club’s history, cliftonvillefc.net today reflects on the facts and figures behind a season that started poorly and contrived to get even worse.

Only one of Cliftonville’s four friendlies took place prior to the season commencing; a 4-2 victory over the Gold Coast national side providing preparation for the City Cup opener with Glenavon two days later.

Towards the end of the campaign, a Kevin McGarry hat-trick ensured a 3-1 home win over Bromley ahead of a 3-2 reverse at the hands of Stockport County and 1-1 draw with an Isle of Man XI.

After a goalless draw with the Lurgan Blues, Cliftonville enjoyed a 3-0 win away to Ballymena United before suffering an absurd-sounding 6-4 home defeat at the hands of Ards.

A 5-2 loss to Coleraine was followed by a 4-4 draw with Distillery and the Reds’ penchant for being involved in goalfests continued with reverses against Bangor (2-3), Glentoran (0-4) and Derry City (3-5) before concluding their City Cup commitments with a 2-1 win over Crusaders at Seaview.

Prior to commencing their County Antrim Shield programme for the 1951/52 campaign came the not insignificant matter of contesting the Final from the previous season.

Delayed until August 20, Cliftonville suffered a 3-0 loss to Ballymena United just five days before overcoming the same opponents by the same scoreline in the City Cup.

When the Shield came round again later in the term, the Reds fared little better; a 2-2 draw with Brantwood teeing up a Celtic Park replay which they lost 1-0. 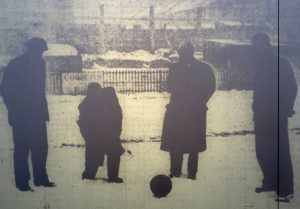 Cliftonville’s involvement in the Gold Cup was short and anything but sweet, with Portadown inflicting a 4-2 defeat in the first round.

After seeing Distillery off 3-1, Cliftonville saw their hopes of Festival Cup success ended by a 3-2 loss to Crusaders.

It was not until November 10 that the Irish League season started – but nobody appeared to have told the Reds, who kicked off with eight straight defeats before arresting the slide with a 4-3 win over Ards at Solitude on Boxing Day.

Another three losses – to Linfield, Bangor and Glenavon – would follow but the team did at least find a degree of stability when they registered successive draws against Ballymena United, Distillery and Derry City before beating Portadown 2-1.

Their form would, however, remain patchy for the remainder of the campaign, from which they signed off with a 1-0 win over Bangor.

A thumping 7-1 win over Seapatrick at a snowy Solitude (above) provided a timely mid-January lifting of the spirits but, after drawing 2-2 with Ballymena United in the second round at Solitude, a 2-0 loss in the replay saw Cliftonville exit the Irish Cup.

In Review
Cliftonville unsurprisingly finished bottom of the 12-team Irish League, five points behind nearest fellow strugglers Linfield and Bangor but some 25 off Champions Glenavon.

Walter Weir was the only player to feature in all 44 of the Reds’ fixtures across all competitions, with goalkeeper Charlie Calow (43) and Ernie McCleary (40) next on the list.

Kevin McGarry topped the Club’s scoring charts with 13 goals from his 24 outings, just ahead of Bruce Shiells (11) and Eddie Miller (8)