Cliftonville supporters of all ages can, with more examples than we’d like to admit, point forlornly to occasions when the Reds have contributed to their own downfall in the Irish Cup, but the 1911/12 season might take some beating.

After successfully negotiating their opening tie, the Club resigned from the competition over a financial dispute and instead shifted their focus to a replacement tournament which, inevitably, they exited courtesy of a comprehensive loss.

Continuing a retrospective series examining noteworthy seasons in the Club’s history, cliftonvillefc.net today reflects on the facts and figures behind a term that, as our main image of a Solitude showdown with Glentoran demonstrates, saw media outlets experiment with interesting ways to illustrate match action.

Cliftonville’s sole warm-up game for the season ahead came in a 6-3 victory over Linfield at Windsor Park, where a hat-trick from J Walden contributed to the visitors’ success.

The Reds’ only other friendly, meanwhile, came in the form of a 1-1 draw with Barn in mid-February.

After losing to Linfield (1-2), Distillery (0-5) and Derry City (0-1), Cliftonville banked their first point courtesy of a goalless draw with Belfast Celtic before a W Girvan double earned a 2-1 victory in the Club’s first ever meeting with Glenavon.

Six straight defeats – including a 5-4 reverse against Distillery – would follow ahead of the Reds concluding their League programme with consecutive 1-0 wins over Glenavon and Shelbourne.

Mid-December saw attentions turn to the City Cup and, after a 4-0 victory secured Cliftonville’s third triumph over Glenavon in as many meetings, Christmas Day saw the Reds fall by the same scoreline to Distillery.

The next four games would, however, deliver no defeats for Hugh McAteer’s side, who overcame Belfast Celtic, Shelbourne and Derry Celtic either side of a 2-2 draw with the Glens.

Despite a 3-1 loss to Linfield, yet another win over Glenavon demonstrated Cliftonville’s new-found confidence, but they endured an inconsistent patch in seeing the competition out despite concluding with wins over Distillery and Belfast Celtic (both 2-1) and a Solitude draw with Belfast Blues.

A solitary Victor McConnell goal earned Cliftonville a win against Belfast Celtic on February 3, but a dispute over referees’ wages meant that was the end of the team’s interest in the Irish Cup.

Fellow semi-finalists Glentoran and Shelbourne likewise withdrew from the competition in protest, which led to Linfield being awarded the trophy. 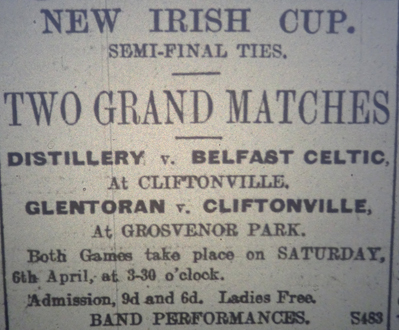 The farcical nature of the Irish Cup’s conclusion led to the incarnation of a tournament rather imaginatively titled the New Irish Cup and, after getting the better of Glenavon in a 4-1 win that yielded four goals from Smyth, Cliftonville exited what would eventually become known as the Gold Cup courtesy of a 4-0 thumping by Glentoran in the semi-final at Grosvenor.

A fortnight prior to that New Irish Cup defeat, the Reds saw their Charity Cup ambitions thwarted in a 3-2 reverse to Belfast Blues.

In Review
Cliftonville finished joint-sixth with Shelbourne in the eight-team Irish League table, one point ahead of Glenavon but some 17 behind Champions Glentoran.

Had Goal Difference been utilised as a means of classification, the Reds would have officially ended the season in seventh, with their -22 record a single goal worse than the Shels’.

Jack Wright featured in 29 of Cliftonville’s 32 games across all competitions, marking him out as the team’s leading appearance-maker ahead of Victor McConnell and W Morrow.

William Wilkin was top scorer with 10 goals, two ahead of nearest challenger Smyth.