Having mounted an ultimately futile title challenge the previous year, Cliftonville approached the 1893/94 season with high expectations of bringing silverware back to Solitude.

They did just that but, unfortunately for them, it wasn’t the top honour they had been hoping for, with eventual Champions Glentoran inflicting a timely defeat that dashed the team’s prospects of a first ever title triumph.

Continuing a retrospective series examining noteworthy seasons in the Club’s history, cliftonvillefc.net today reflects on the facts and figures behind a term that promised so much but did not ultimately live up to its billing.

With the concept of pre-season warm-up games having not yet become an established part of football tradition, any friendlies that Cliftonville played in 1893/94 came slap-bang in the middle of competitive action.

The first was a 4-3 defeat to Glentoran on October 28, before Old Cliftonians were beaten 4-0 at Solitude at the end of November. 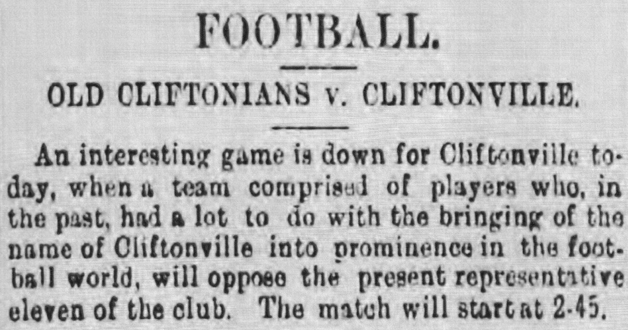 A 5-1 triumph over Ligoneil got Cliftonville’s League programme up and running, with a 3-2 defeat of Distillery and 3-3 draw with Linfield contributing to an encouraging start.

Glentoran would impose the Reds’ first reverse (0-1) and kick-start a sequence of up and down results that ended with another loss to the Glens; 8-0 on this occasion.

After easing past Donacloney with a 4-1 win in the first round, Cliftonville’s 4-2 victory over Ligoneil in the quarter-finals saw William Gibson score the Club’s first ever penalty.

That would, however, prove to be the team’s final highlight of the competition ahead of their interest being ended by a 3-2 loss against Linfield in the semis.

Rosebank were dispatched 4-1 at Solitude on January 20 to send Cliftonville through to a semi-final battle with Distillery, who were resoundingly overcame 8-3 ahead of goals from G Williamson and Baird earning a 2-1 win over Belfast Celtic in the decider.

Cliftonville’s hopes of adding further silverware to the Solitude trophy cabinet got off to a good start when Ligoneil were beaten 3-2 in the Charity Cup quarter-finals, only for Linfield to inflict a 7-0 hammering the following week.

In Review
Cliftonville finished third in the six-team Irish League table, six points behind Champions Glentoran, four off runners-up Linfield and seven ahead of bottom side Ligoneil.

Although records are incomplete, it’s understood that only three players – Baird, William Gibson and Robert Stewart – played in all 18 of the Reds’ fixtures across all competitions.

William Gibson was the team’s top scorer with 12 goals, five ahead of nearest challengers Jimmy Small and James Barron.