Cliftonville’s Irish Cup history is littered with all sorts of unlikely twists, turns and often – despite the supporters’ best efforts – unforgettable encounters.

The story of the team’s success in the 1900/01 competition proved no different, with a Quarter Final defeat at the hands of Belfast Celtic not enough to halt the team’s march to a successful defence of the trophy.

Continuing a retrospective series examining noteworthy seasons in the Club’s history, cliftonvillefc.net today reflects on the facts and figures behind the year that saw a player by the name of Thomas Foreman set positive and negative milestones in the Reds’ quest for silverware.

Cliftonville required just a single warm-up game in preparation for the Irish League season; W Kirkwood’s goal enough to get the better of Linfield at Solitude.

At the end of November, however, a Jim Campbell hat-trick wasn’t enough to spare the Reds from a 5-3 defeat at the hands of Freebooters, while Linfield were defeated again – 3-1, this time – on Boxing Day.

The team’s League programme commenced in a 3-3 draw with Derry Celtic on a day that saw Thomas Foreman score Cliftonville’s first ever penalty at Solitude – not the first landmark he would set during the campaign.

Though defeated at Glentoran, the Reds hit back with 1-0 and 2-0 wins over Belfast Celtic and Linfield, respectively, before a second reverse at the hands of the Glens in a 10-match schedule that unfolded thus…

Despite that four-month wait between the team’s final two fixtures, it was that 4-3 loss at the hands of eventual Champions Distillery that ultimately put paid to Cliftonville’s title ambitions. 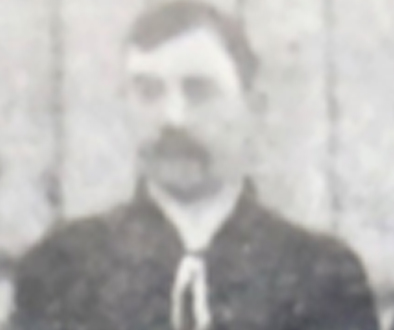 Just a week prior to that defeat to the Whites, a 1-0 win over the same opponents saw the holders begin their Irish Cup defence in encouraging style.

Foreman (above) became the first ever Cliftonville player to be sent off when Derry Hibs were thumped 4-1 in the second round before the team’s interest looked to have been ended courtesy of a 2-0 defeat to Belfast Celtic at the Quarter-Final stage but, when an eagle-eyed member of the Club’s committee spotted that the crossbar at Celtic Park fell below regulation height, the contest was replayed at Solitude, where the Reds duly won 4-2.

The circumstances surrounding that reinstatement is understood to have upset many at Cliftonville, who deemed it to be an ungentlemanly means of making progress, but despite the Hoops’ protesting the outcome, it was indeed the Reds who stepped forth into a Semi-Final encounter with Derry Celtic.

There was no ambiguity this time as Cliftonville won 3-1 at Balmoral before a solitary James Scott goal got the better of Freebooters in the April 13 decider to ensure back-to-back Irish Cup triumphs.

After a goal from Plant – in his one and only outing of the season – got the better of Glentoran at The Oval, Cliftonville went on something of a goal spree with a 5-0 win over Belfast Celtic and 4-1 success away to Linfield.

Distillery would claim a 2-1 win on Christmas Day, but the Reds began 1901 with a draw at home to the Glens and goalless draw with Linfield.

After an encouraging 3-1 win over Distillery at the end of April, the team’s season ended on a disappointing note in a 3-0 defeat to Belfast Celtic when, presumably, the crossbar did not cause any consternation.

Distillery West End were comfortably overcome on January 12 before two Campbell goals got the better of Linfield at the Semi Final stage.

A fortnight ahead of their Irish Cup heroics, however, the Reds were unable to add the County Antrim Shield to the boardroom cabinet when Glentoran triumphed 2-1 in the Final at Balmoral.

This was the only competition in which Cliftonville failed to make any kind of inroads; a 2-2 draw with Linfield at Grosvenor Park being followed up by a rare loss to the Blues in the replay.

In Review
Cliftonville finished fourth in the six-team Irish League table, six points behind Champions Distillery, two ahead of Linfield and nine above bottom side Derry Celtic.

Goalkeeper Sam McAlpine (main image) was the only player to feature in all 28 of Cliftonville’s fixtures across all competitions and also made his one and only appearance for Ireland in February 1901 – an 11-0 defeat to Scotland in Glasgow.

Jim Campbell’s 11 goals marked him out as the team’s top scorer, three ahead of nearest challenger Jim Scott.