Regular readers of our Matchday Magazine will know all the facts and figures behind each new week at Cliftonville Football Club, while our Twitter followers are regaled with daily delves into the archives – and today provides yet another significant milestone.

For it was on October 13, 2009 that Cliftonville defeated Celtic 3-0 in the Club’s 130th Anniversary Celebration Match, with a sold-out Solitude welcoming the Hoops back to Belfast for the first time in 25 years.

Two first-half headers from Chris Scannell put the Reds in control ahead of Ciaran Caldwell putting the icing on the cake just past the hour.

It was, however, the visitors who started the brighter with Zheng Zhi threading Paul McGowan through on goal, only for John Connolly to make the save. 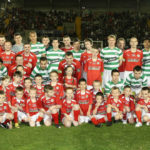 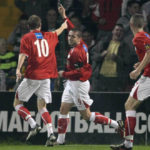 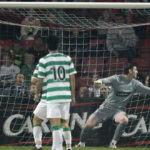 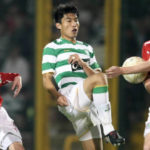 Scannell was presented with an opportunity to break the deadlock after Ryan Catney had dispossessed Barry Robson, but defender Josh Thompson was quickly across to block.

Connolly once again kept McGowan at bay following a neat one-two with Marc Crosas before the breakthrough came on 21 minutes when Ronan Scannell’s exquisite delivery from the left was seized upon by brother Chris, who powered an unstoppable header past Lukasz Zaluska.

Celtic almost levelled in comical circumstances when Ciaran Donaghy’s attempted clearance struck McGowan and looped goalward but, once more, Connolly was alert to the danger and it wasn’t long before the ball was back in the net at the other end when, again, the Scannell siblings combined to double Cliftonville’s advantage.

Chris almost sealed his hat-trick after the interval only to see his header well saved by Zaluska, who could do nothing to stop Caldwell following up to make it 3-0.

Substitute Reds keeper Paul McKane then played his part in ensuring a clean sheet when he made a fine save to deny Koki Mizuno as the Reds comfortably saw things out against Tony Mowbray’s side.