Rachel Norney and Erin Montgomery were part of the squad that enjoyed a 3-0 victory over Gibraltar on Monday before, after battling back from 2-0 down, claiming a 5-3 penalty shoot-out success against Scotland on Tuesday.

Yesterday’s final fixture, meanwhile, saw NI claim another win from the spot following a 2-2 draw; Montgomery picking up the Player of the Match award as Wales were beaten 4-3. 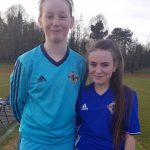 He was joined in the panel by Reds team-mates Marc Davidson and Caolan Donnelly, with the team beginning their campaign with a battling 2-2 draw against the hosts and eventual winners.

A 2-1 win over IFK Stocksund (Sweden) was followed by a 1-0 defeat to Cardiff City to round off the first day of action, with McVicker among the scorers were Total Soccer Cayman were beaten 4-0 the following morning ahead of a 4-1 triumph against Danish side Fremad Amager.

Congratulations are extended to Rachel, Erin, Padraig, Marc and Caolan on their exploits at internatiol level this week and for their continued positive representation of Cliftonville Football Club.