There was Cup action galore throughout the Cliftonville Ladies Academy this weekend, with our Under-10s and Under-17s booking places in their respective SBYL Cup Finals.

Our Under-9s (pictured) also did us proud at the St Mary’s tournament, while Zara McCartan’s name was on the scoresheet for both the Under-15s and Under-17s in another typically busy few days of action. 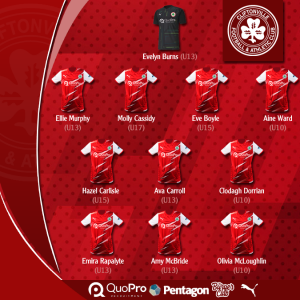 Under-9s
Hollie Delaney, Abbie McCrory and Lily McCrea were among the goals when the Reds took on St Malachy’s, Barn United and host Club St Mary’s in a tournament at UUJ.

Under-11s/10s
Despite suffering defeat to Lisburn Ladies in a Cup quarter-final clash at Colin Park, Mia McCracken impressed with a two-goal salvo.

Under-10s (Red)
Olivia McLoughlin was the star performer in Cliftonville’s SBYL Cup semi-final encounter with Lisburn Rangers at Brook, where Katie Lewis (2) and Niadh Fegan were also on target.

Under-13s
A busy weekend of action saw the team contest three friendlies – Emira Rapalyte netting against Killyleagh at Coláiste Feirste on Saturday; Amy McBride celebrating a double in Sunday’s tie with Ballymena at Ballysillan; and Maddy Mailey on target in the Solitude battle with Beann Mhadaghain.

Under-15s
Goals from Holly Campbell, Hazel Carlisle and Zara McCartan told the story of the Reds’ tie with Rosario at Brook.

Under-17s
An SBYL Cup Final place was secured thanks to Zara McCartan, Lucy Loughens and Brook McAree finding the net against Comber Rec at Aquinas.

Under-18s
Unfortunately, however, the Reds were denied a place in the Under-18 decider when they slipped to a 1-0 defeat at the hands of Ballyclare Comrades.