One week on from scoring twice for the Under-10s in a forward role, Katie Wilson this weekend excelled as a goalkeeper.

Despite catching the eye against Ballynahinch Olympic at Avoniel, Wilson was edged out of our latest Team of the Week by her team-mate Paige Cosgrove, who impressed against Bloomfield as part of another busy few days for the Cliftonville Girls Academy. 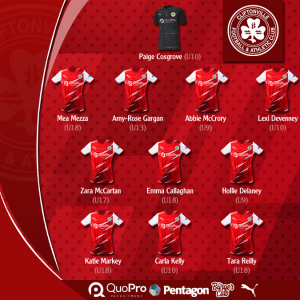 Under-9s
Goalscorer Hollie Delaney was also her Coaches’ Player of the Match for her performance against Ballyclare on Sunday.

Under-10s (Red)
Carla Kelly and Lillianna McKeown were on target against Ballynahinch Olympic at Avoniel, where goalkeeper Katie Wilson was the star player.

Under-10s (White)
Clodagh Dorrian was on the scoresheet in her side’s contest with Bloomfield.

Under-14s
Amy-Rose Gargan was the Reds’ standout performer in their friendly with Crusaders.

Under-17s
Hat-trick hero Zara McCartan was joined on the scoresheet by Charlotte White in Sunday’s battle with Comber Rec.

Under-18s
Katie Markey and Tara Reilly enjoyed a productive weekend, each finding the net in two games. Markey bagged two of Cliftonville’s three goals against Sion Swifts on Friday before the duo shared a strike each when Glentoran provided the opposition.