A host of Cup ties with Ballyclare Comrades told the story of another busy weekend for the Cliftonville Girls Academy.

Less than a week since our senior stars got to grips with the Danske Bank Women’s Premiership trophy, we’re continuing to monitor the up-and-coming stars who hope to one day follow in their historic footsteps. 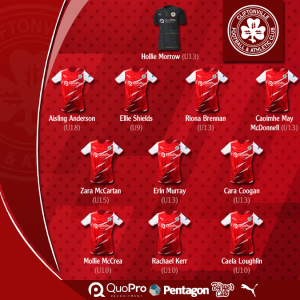 Under-9s
Ellie Shields (below) landed the Coaches’ Player of the Match award for her performance in Sunday’s Irish FA Games Development Programme encounter with Linfield.

Under-11s/10s
Mia McStravick and Leah McCracken were both on target against Harland & Wolff Welders at Blanchflower Park. 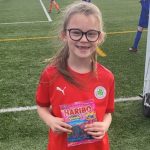 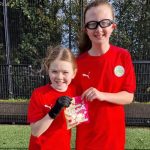 Under-10s (Red)
Rachel Kerr (above, with Mollie McCrea) hit a double alongside strikes from Olivia McLoughlin, Liliana McKeown, Niadh Fegan, Carla Kelly and McCrea in the game with Ballyclare Comrades.

Under-12
Cara Coogan scored all four of Cliftonville’s goals against Kelvin Youth at Mallusk.

Under-13s
Rionna Brennan celebrated a hat-trick in the tie with Loughside, against whom Michaela Cummings and Aliyah Conlon were also on the scoresheet.

Under-14s
Amy McBride was at the double and Mia Callaghan also celebrated a goal in the Reds’ Cup date with Ballyclare at Ballysillan.