While Cliftonville Ladies celebrate their first ever Danske Bank Women’s Premiership title success, we’re continuing to monitor the up-and-coming stars who hope to one day follow in their historic footsteps.

No fewer than three Reds players scored four times this week, with our Under-9s (pictured) celebrating the contribution of Hollie Delaney, while Olivia McLoughlin and Hannah McEntee hot quadruples for the Under-10s and Under-17s, respectively, during another busy run of ganes at various levels of the Cliftonville Girls Academy. 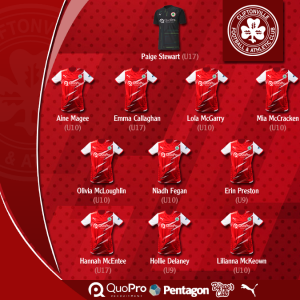 Under-9s
Though Hollie Delaney netted four times against Larne at V36, it was Erin Preston – who accompanied Lola McGarry and Lily McCrea on the scoresheet – that landed the Player of the Match gong. 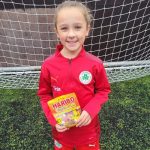 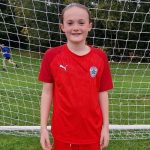 Under-10s (White)
Holly Saunders and Player of the Match Katie Lewis were the scorers against Berlin Swifts at Avoniel Leisure Centre.

Under-17s
While Emma Callaghan toasted a hat-trick in the tie with Ballyclare at Ulidia, team-mate Hannah McEntee went one better with four goals to her name.