Kris Lowe says Cliftonville are determined to atone for last week’s defeat at Coleraine by getting their Danske Bank Premiership season up and running against Carrick Rangers.

The Reds slumped to their first opening day reverse in 24 years with an off-colour display at The Showgrounds but Lowe is hopeful that a vociferous home support can roar them to three points at Solitude tomorrow.

“We hope the fans are with us for the weekend because it was abysmal to be honest,” he says of the 3-1 loss to the Bannsiders.

“We’ll take the Carrick game as a new start and hopefully we can kickstart the season with a home win in front of our home support, who always give us a good backing.” 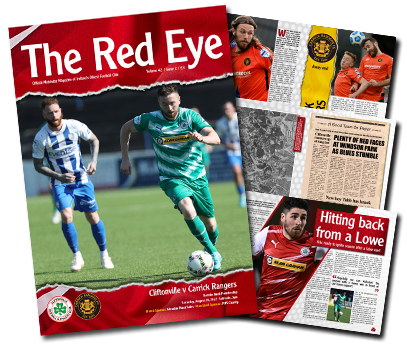 You can read the full Lowe interview in tomorrow’s edition of our Matchday Magazine, which will be on sale at Solitude for £3.

Carrying pre-match views from the Manager’s Office, The Red Eye’s second issue of the campaign also reflects on the Gers’ summer revamp alongside a string of brand new features.