Ronan Hale’s arrival at Cliftonville not only sees him link up with brother Rory for the third time in his career but also provides the next chapter of siblings to have joined forces at Solitude.

While the McGuinness sisters, Caitlin and Kirsty (below), have been catching the eye for our Ladies team in recent times, our Men’s side has a rich history of brothers appearing on teamsheets dating all the way back to the Club’s formative years, with cliftonvillefc.net today taking a sprightly – but by no means definitive – rake through the archives with the assistance of Heritage Development Officer Paul Treanor.

In the 1890s, it would have been unusual to have seen a Cliftonville line-up without a Pyper in situ, with no fewer than four on the books, although some made more of an impression than others.

John Pyper, for example, made 125 appearances for the Reds, while brother James played 124 times in comparison to the four and three outings enjoyed by Drury and Spring, respectively.

Even prior to that, Joe and H O’Halloran – the latter of whose first names is not officially on any known record – turned out during the 1881/82 campaign; Renwick Potts and brother Joe appearing in the same year, while John and Jim Campbell amassed 230 matches between them from 1895-1905.

One sibling making substantially more appearances than another is a common occurrence, with no case more understandable than that of Harry and Irwyn McKibben, both of whom were goalkeepers and, as such, in direction competition with one another; Harry’s 241 games dwarfing Irwyn’s 32.

The 1980s, meanwhile, saw Tony and Eddie Coulter in the team, while the 90s heralded the arrival of two sets of brothers – the Drakes, Billy and John, as well as McDonaghs, Philip and James. 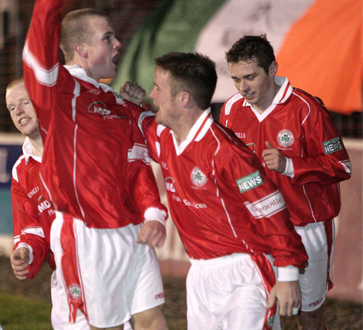 More recently, of course, Chris and Ronan Scannell netted 149 goals in a combined 579 matches; Barry and Mark Holland (above) passed the 400 appearances barrier between 2005-2014 and double title-winner Barry Johnston’s younger brother Gavin enjoyed a handful of outings in his youth.

Jay and Ruaidhri Donnelly were the last siblings to link up for Cliftonville’s Men’s team, however Ronan Hale’s arrival adds another dimension to the family’s Solitude links, with grandfather Danny having played 52 games for the Club between 1959-1961 – some 60 years before Academy star Rory’s senior debut.