Cliftonville Football Club were this weekend delighted to induct George McMullan to the John McCredy McAlery Hall of Fame.

Welcomed by Chairman Paul McKeown during Saturday night’s Cliftonville FC Awards at the Hilton Hotel, George – who scored 103 goals in 545 appearances between 2001-2016 – joins the illustrious names bestowed with iconic status at Ireland’s Oldest Football Club, but admitted he still harbours a grudge with Manager Paddy McLaughlin for not having played more times.

Recalling a clash with the Institute team that McLaughlin captained in March 2015, McMullan used his acceptance speech to reference a tackle that he believed the current Reds boss crunched him with and which led to a spell on the sidelines.

Though light-hearted in his reminiscing, George brought the house down with a firm “No” when asked by compere Tim McGarry if the passage of time meant he had now forgiven and forgotten – only to later discover that it was, in fact, another Paddy McLaughlin entirely! 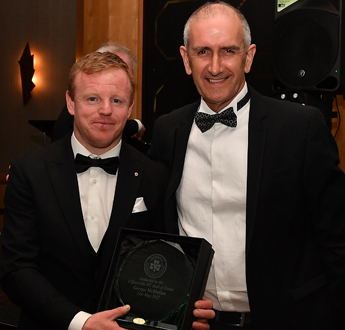 Named in honour of Cliftonville FC’s founding father, the Hall of Fame was established to celebrate and highlight the achievements of our greatest ever servants, with McMullan rightly congratulated and acknowledged for the integral role he played at Solitude.

Handed his debut by Marty Tabb – the first of six Managers he would feature under – on December 11, 2001, double-Premiership winner George brought the curtain down following a Europa League Play-Off Final victory over Glentoran on May 10, 2016.

A reliable performer in a variety of positions under Tabb, Liam Beckett, Eddie Patterson, Tommy Breslin and Gerard Lyttle, McMullan also undertook a one-game stint in a caretaker capacity alongside Mal Donaghy towards the end of the 2016/17 campaign.

By that stage he had, of course, already called it a day on the playing front at the Club having added four League Cup crowns, four County Antrim Shield honours and a Charity Shield success to those successive League titles.

Granted a Testimonial against a Celtic XI in April 2016, Arsenal fan George – whose celebratory Gala Dinner saw former Gunners and Ireland defender David O’Leary attend as Guest of Honour – represented the Reds in Europe on 15 occasions and was part of the first ever Cliftonville side to taste victory on the continental scene when FC Dinaburg of Latvia were dispatched from the Intertoto Cup in 2007.

A stalwart who always performed with pride, passion and no little fire in the belly, George was initially introduced as an attacking player before making his name in the centre of the park and, latterly, as the best right full-back in the League, and accrued a total of five red cards during his time with the Club – with the most famous one of all coming while he was warming up as a substitute during a game with Crusaders at Seaview!

His most celebrated moment was, of course, the unforgettable injury-time penalty he dispatched against Linfield on April 13, 2013 to secure the Reds’ first League title in 15 years, but by that stage he was already some distance down the road towards legendary status at Solitude and sits comfortably alongside the various iconic figures present in our Hall of Fame.