Cliftonville Football Club notes with sadness the death of former player Ronnie Giffen at the age of 88.

After representing Glentoran, Ronnie joined the Reds in the summer of 1953 and made the first of 98 appearances in an Ulster Cup fixture with Crusaders in August of that year.

His maiden goal for the Club also came against the Crues, in a League fixture at Solitude, with the right-half scoring a further three times before his final outing in a Gold Cup tie with Distillery in April 1957.

Ronnie – whose four Amateur International caps were all won during his time at Cliftonville – then signed a semi-professional contract at Ards, with whom he was crowned an Irish League Champion in his first season. 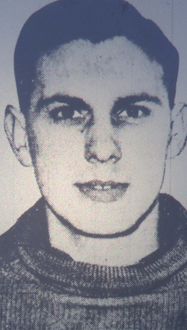 Born in Roslyn Street in Belfast, Ronnie’s employment with Rolls Royce took him to various locations, including England, where he settled and eventually retired.

He and wife Joan had four children, 11 grandchildren and one great-granddaughter, all of whom are extended the deepest sympathy of all at Cliftonville FC at this difficult time.

May he rest in peace.