The 29-year-old central defender says that, as much as last Friday’s Samel Gelston’s Whiskey Irish Cup semi-final loss to Crusaders was a setback, what mattered most in the aftermath was that the team reacted positively to get the better of Portadown in their midweek Danske Bank Premiership tussle.

“We were competing on all fronts on that point and we wanted to make sure we got to the Irish Cup Final, but it wasn’t to be.

“It was important we got a result and that’s the way we look at every game.” 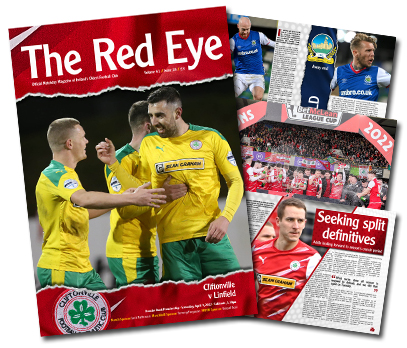 You can read the full Addis interview in tomorrow’s edition of our Matchday Magazine, which will be on sale at Solitude for £3.

Featuring pre-match views from the Manager’s Office, The Red Eye’s 24th issue of the campaign carries a special League Cup Final souvenir pull-out and steps 141, 90 and 37 years back down memory lane – plus plenty more besides.