Chris Curran says that a collective effort is responsible for Cliftonville’s progress this season.

Tomorrow’s North Belfast Derby duel with Crusaders kicks off a vital fortnight of fixtures that also includes an Irish Cup quarter-final clash and the League Cup Final, with Curran insisting that Paddy McLaughlin and his backroom staff deserve as much credit as the squad for the big-game nature of every match the Reds enter into.

“One of the lads said during the week, it’s probably as exciting as it has been at this stage of the year in probably seven or eight years,” he explains.

“Paddy keeps telling us it’s the players but it’s all the lads and the togetherness, fight and work-rate all year that has put us in this position.

“We won’t be doing anything different, we’ll keep it ticking over and we’ll bring on this game next.” 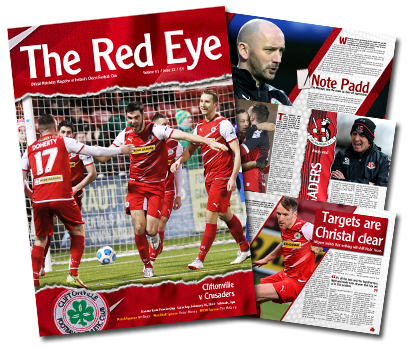 You can read the full Curran interview in tomorrow’s edition of our Matchday Magazine, which will be on sale at Solitude for £3.

Featuring pre-match views from the Manager’s Office, The Red Eye’s 22nd issue of the campaign looks at the Crues’ recent late shows and steps 124, 33 and 25 years back down memory lane – plus plenty more besides.