Colin Coates says he feels rejuvenated at Cliftonville ahead of tomorrow’s “massive” showdown with Coleraine.

The Reds host the Bannsiders in a vital Danske Bank Premiership encounter fresh from successive away victories over Carrick Rangers that saw Coates make back-to-back starts for the first time since joining the Club – and the experienced defender is relishing the conveyor belt of big fixtures that he and his team-mates are facing.

“I haven’t played a lot before the last week or so but, even still, I was loving it and I love working with Paddy,” says the 36-year-old.

“I think Paddy is a fantastic Manager and he’s given me a new lease of life.

“Every game is tough and every game just keeps getting bigger and bigger because we keep winning and we keep doing well. It puts extra incentive on going to the next game, whether it is the Irish Cup or the League and it’s a massive game against Coleraine and hopefully we can pick up three points.” 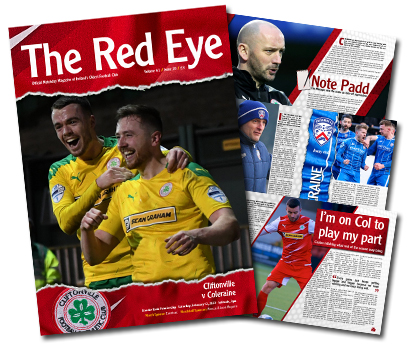 You can read the full Coates interview in tomorrow’s edition of our Matchday Magazine, which will be on sale at Solitude for £3.

Featuring pre-match views from the Manager’s Office, The Red Eye’s 20th issue of the campaign assesses the Bannsiders’ recent boom and steps 45, 39 and 31 years back down memory lane – plus plenty more besides.