Levi Ives is keeping his fingers crossed that his injury hell is behind him.

The 24-year-old missed virtually two years of action with a metatarsal problem and, though he was forced to sit things out for a brief spell with another complaint earlier this term, has returned arguably better than ever, with recent performances earning him November’s Player of the Month accolade from Reds fans.

“I’ve been working hard after the injury and I feel very good – probably the best I’ve felt since I signed for Cliftonville,” reveals the defender, who is set to make his 200th appearance for the Club in this evening’s County Antrim Shield semi-final with Linfield at Solitude.

“This is another game and Saturday is put to bed. It will be a full house I’m sure and the fans are the 12th man for us every week.

“Hopefully we can give them something to cheer for.” 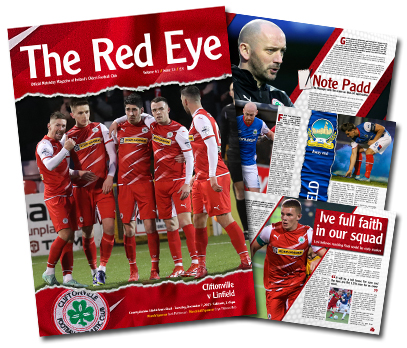 You can read the full Ives interview in tonight’s edition of our Matchday Magazine, which will be on sale at Solitude for £3.

Featuring pre-match views from the Manager’s Office, The Red Eye’s 13th issue of the campaign reflects on the Blues’ bright form and steps 75, 36 and 19 years back down memory lane – plus plenty more besides.

Members Tickets, Season Tickets and Family Tickets are not valid for this fixture.

Social Club
Supporters intending to visit the Social Club are reminded of the Covid Passport regulations that were introduced last week, with all entrants required to demonstrate evidence of: