That’s the declaration of Kris Lowe, who insists the Reds will bring the same attitude into this match as they have done for every fixture so far this season as they bid to extend an unbeaten run that stretches across three competitions.

“Bangor is another game we won’t take lightly,” says the 25-year-old.

“We want to win every game we play and we’ll prepare properly and look after ourselves and we’ll go again and hopefully get in the hat for the last four.

“We won’t underestimate their threat. We have to respect our opponents – they’ll have players that can hurt us but we feel the same way.” 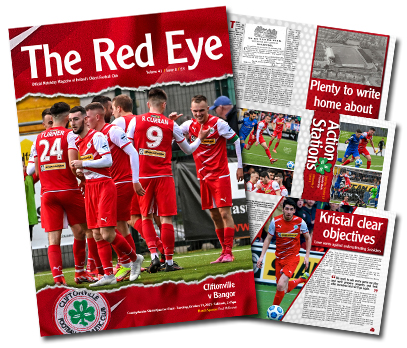 You can read the full Lowe interview in tonight’s edition of our Matchday Magazine, which will be on sale at Solitude for £3.

Featuring pre-match views from the Manager’s Office, The Red Eye’s eighth issue of the campaign reviews the Seasiders’ bid to climb the standings and steps 120, 20 and 19 years years back down memory lane – plus plenty more besides.