It’s a brave person who dares suggest to Colin Coates that the County Antrim Shield doesn’t carry any significance.

Cliftonville begin their commitments in this season’s competition with a first round tie at home to Knockbreda this evening and Coates is determined to enjoy rewarding inroads, despite the tournament’s plentiful naysayers.

“Whether it is the League Cup, Irish Cup, County Antrim Shield or the League, they all deserve your full attention.

“Obviously the County Antrim Shield is probably the least prestigious of all the trophies but, at the end of day, it’s still a trophy.” 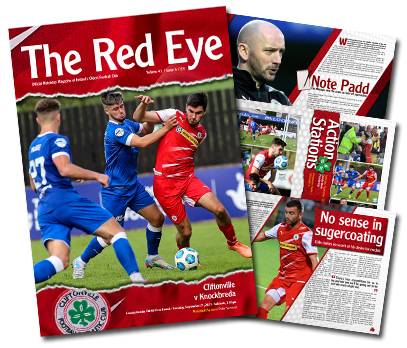 You can read the full Coates interview in tonight’s edition of our Matchday Magazine, which will be on sale at Solitude for £3.

Featuring pre-match views from the Manager’s Office, The Red Eye’s fifth issue of the campaign reviews Breda’s patchy start to the season, steps 81, 30 and 12 years back down memory lane and issues an appeal over a mystery contest in 1995 – plus plenty more besides.