Weekend goal hero Jamie Harney says that, though Cliftonville must be wary of a Coleraine backlash this evening, they must not lose track of playing to their own strengths.

While the defender’s double helped the Reds begin the new Danske Bank Premiership season with a 2-1 victory over Carrick Rangers, the Bannsiders suffered a 4-2 reversal at Larne – and Harney expects Oran Kearney’s side to be fired up for their quest at Solitude tonight.

“An animal is more dangerous when it’s wounded and Coleraine will be disappointed with the result on Friday night,” says the 25-year-old.

“They’ll be coming here fully motivated to try and get their season off and running and we know we have to be on top of our game to try and stop that. Oran has done a brilliant job up at Coleraine but we’re fully focused on us and what we can do.” 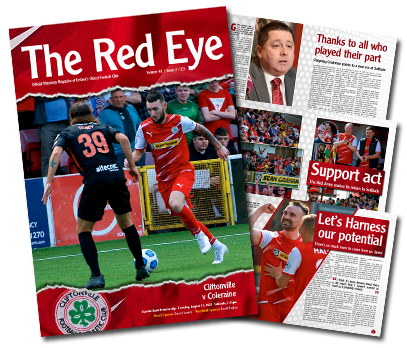 You can read the full Harney interview in tonight’s edition of our Matchday Magazine, which will be on sale at Solitude for £3.

Featuring a message from outgoing Chairman Gerard Lawlor and pre-match views from the Manager’s Office, The Red Eye’s second issue of the campaign carries your latest 2021/22 player poster, reflects on the Red Army’s return to Solitude and steps 120, 44 and39  years back down memory lane – plus plenty more besides.