Amid ongoing work to replace the pitch at Solitude, cliftonvillefc.net continues a mini-series reflecting on 11 years of 3G action.

Having commenced by reflecting on how vital a role the synthetic turf helped the Club play within the local community before examining the stats behind the surface, today we look at the trophy success that Cliftonville enjoyed on the synthetic pitch.

During a decade that heralded some of the most rewarding times in the Club’s history, the Reds won the County Antrim Shield in 2011, 2015 and 2020; the League Cup in four consecutive years from 2013-2016 and the Danske Bank Premiership in 2013 and 2014 – not forgetting the Charity Shield which followed the same year.

But which of these accolades were actually clinched at Solitude?

The first was, of course, the Gibson Cup in 2013 when George McMullan’s iconic injury-time penalty against Linfield saw Cliftonville crowned Champions for the first time since 1998. 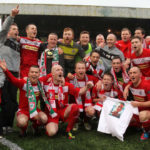 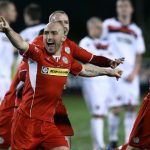 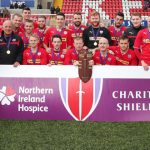 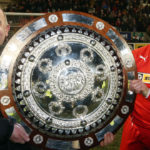 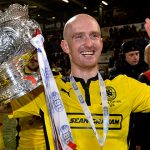 In January of the following year, meanwhile, the Reds sealed back-to-back League Cup triumphs when Crusaders were defeated on penalties at the end of a goalless Final at Solitude.

A shoot-out would also prove Cliftonville’s avenue towards lifting the Charity Shield a few months later; another 0-0 draw – this time with Ballymena United – necessitating more spot-kicks.

In January 2015, meanwhile, a sole Jude Winchester strike was enough to see off Bangor in the County Antrim Shield decider, just over a year ahead of Martin Donnelly, Davy McDaid and Stephen Garrett finding the net when Ards were overcome in the League Cup Final.

Trophies won since the installation of a 3G pitch
Danske Bank Premiership
2013, 2014