For it was on June 11, 1926 that the fourth Red Carnival commenced at Solitude.

A two-week long funfair, with stalls, entertainments, nightly music and refreshments, the fundraising festival – which had previously taken place in 1894, 1902 and 1910 – was launched by Sir William Turner, Lord Mayor of Belfast, with a 52-page booklet commissioned to outline the “host of attractions brought together for this occasion and will show that no effort has been spared to give visitors the most enjoyable amusement possible”.

Very much in keeping with prevailing attitudes of the time, special effort was made to thank “the many lady friends” who provided assistance at the stalls.

A selection of female volunteers

“We only too fully realize what a poor show our Carnival would be without the aid of the fair sex, who have from the commencement of this effort shown a bond of sympathy and understanding that will culminate in the capitalization of that mighty word – success,” the booklet read.

Among the highlights of the fortnight was the evening that saw large crowds gather to cheer as ‘The Blue Hussars’ marched through the city streets to Solitude, where they engaged in a contest with the Queen’s Island band for the Beecham Cup, while a “valuable prize” was offered to the entrant whose balloon covered the greatest distance in the hotly-anticipated Aerial Derby. 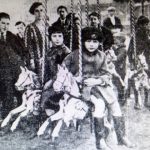 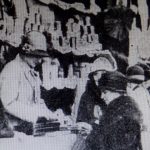 A hive of activity at the Red Stall 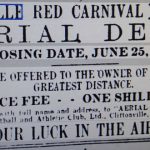 It’s understood that the ‘Fancy Fair’, like its three predecessors in the 32 years previous, raised considerable funds for the Club, who used the money to “commence and complete the enclosing of our grounds by a suitable and lasting wall, and, further, get well under way with the erection of terracing all over the enclosure”.