John McGrady says Cliftonville Ladies are approaching the new season with heightened expectations following significant upheaval on and off the pitch.

The Reds – who begin their Danske Bank Women’s Premiership campaign with a trip to Derry City on Wednesday night – recently welcomed Northern Ireland internationals Louise McDaniel, Caitlin McGuinness and Kirsty McGuinness (below) to Solitude on the back of signing Grace McKimm and Shona Davis.

McGrady was, meanwhile, appointed boss amid a raft of background changes that saw Martin Douglas assume the role of Head of Women’s Football at the Club, while Clare Carson and Stuart Irvine were installed on the coaching set-up. Elite Player Coach Brendan Lynch now provides coaching and player development support to the Women’s section, with Amanda Irvine continuing her position with the Cliftonville Girls Academy.

With Eimear’s Wish, Dream Spanish Homes and Pentagon recently unveiled as part of a three-strong sponsorship package (above), it’s little wonder that the Reds approach the new campaign with a renewed sense of optimism.

“We have seen that there is quality in the squad, they just didn’t believe in themselves yet,” says McGrady, whose side will host Linfield Ladies in their opening home fixture next week.

“It’s a project too and the Club really wants to give something to this and they see the strength in Women’s football and what’s going on with the international team and that they have to grow the game within the Club.” 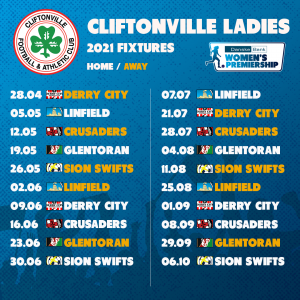 Reflecting on the addition of his recent recruits, McGrady adds: “It moves our target down the road a little bit and we need to be in there challenging.

“We believe we can have a very good season and we’re all looking forward to getting started.

“Those signings could make any team a better team and push any team on to challenge for the League.

“We are hoping that it adds depth and quality to the squad and the players have real match-winning qualities and could be the difference in a lot of games.”