Cliftonville Ladies are delighted to announce three new partnership agreements on the eve of the 2021 season.

The Reds, who commence their new Danske Bank Women’s Premiership campaign with a trip to Derry City at the end of this month, will proudly sport the Eimear’s Wish logo on the front of jerseys during the forthcoming term.

Dream Spanish Homes and Pentagon have, in addition, taken out sponsorship positions on the back of the Ladies’ shirts and everyone at Solitude is very pleased to welcome them aboard.

Eimear Smyth was a Belfast woman who was diagnosed with stage two Hodgkin’s Lymphoma, a type of blood cancer, in September 2016 and who sadly passed away at the age of 25 from complications relating to a donor cell stem transplant in 2019.

In her memory, Eimear’s family have continued to campaign for those with life-threatening illnesses by raising awareness of cell stem donation and, having first highlighted their story in the summer of 2019, Cliftonville FC were only too pleased to assist her father Sean with February’s launch of their programme to raise stem cell donor awareness. The response to that campaign has been phenomenal, with every Danske Bank Premiership Club lending their assistance.

“One of Eimear’s last wishes was for me to get as many people as possible to join the stem cell donor registry in Northern Ireland,” explains Sean.

“In addition to the Cliftonville Ladies team displaying the Eimear’s Wish Dragonfly logo on the shirts, pitchside banners will be promoting stem cell donor awareness and the Club will also be using their website to encourage supporters to join the stem cell donor registry.” 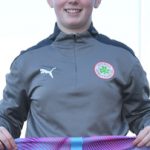 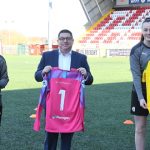 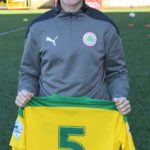 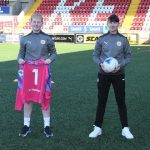 He added: “Eimear loved football. We are overwhelmed and deeply moved by Cliftonville’s and the Irish Premiership’s support for the campaign and to our family.

“We will be eternally grateful for the love and support they have showered us with. Football is the people’s game and what better way to give back to the supporters than by creating hope for people with life threatening illnesses such as blood disease?”

Antoinette Herdman, of Pentagon, said: “Pentagon is excited to continue our ongoing sponsorship of the Cliftonville Ladies football team as we believe it is important to support women’s sport throughout Northern Ireland especially during these unprecedented times. We look forward to cheering them on this season.”

“Women’s football is on an upward curve and, as a former Cliftonville player, I’m delighted to be giving back to the Club and aiding their development.

“Dream Spanish Homes and Cliftonville Ladies are on similar trajectories in that we are all growing, reaching a wider audience and striving to be number one in our respective fields of play.

“Good luck from the only agent who gives you more.”