For today marks a decade since the second-highest scoring North Belfast Derby of all time, when the Reds defeated Crusaders 6-4 in a madcap Setanta Sports Cup quarter-final encounter at Seaview.

Leading 4-2 from the first leg, any Cliftonville fears over the two away goals the Crues had registered at Solitude were washed away when Kieran O’Connor and Mark Holland found the net in the first 11 minutes of the game, which came just 48 hours after the Reds had lost 5-0 at the same venue on Premiership duty.

Vincent Sweeney and William Faulkner struck to drag Crusaders level on the night and, though O’Connor would make it 3-2 to Cliftonville – and 7-4 on aggregate – Declan Caddell’s header made it six goals in a thoroughly entertaining first-half. 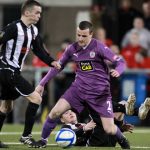 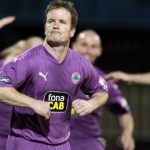 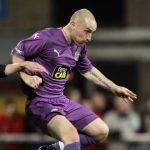 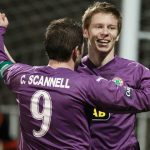 A foul on Stephen Garrett earned the visitors a 55th minute penalty, which George McMullan converted to make it 4-3 ahead of Garrett extending the Reds’ overall lead to 9-5.

Caddell’s second gave Crusaders a fighting chance of levelling things up on the night only for substitute Ruaidhri Donnelly to bag the Reds’ sixth to seal a 6-4 win and 10-6 aggregate success which meant that the sides had traded no fewer than 21 goals in three meetings across just eight days.