Regular readers of our Matchday Magazine will know all the facts and figures behind each new week at Cliftonville Football Club, while our Twitter followers are regaled with daily delves into the archives – however the weekend just past carried a little-known anniversary in Club history which, thanks to Heritage Development Officer Paul Treanor, can be reviewed for the very first time.

Friday marked 94 years since the Reds’ first ever Irish Cup meeting with Crusaders, a semi-final encounter at The Oval which Hugh McAteer’s Cliftonville won 4-2. An outside right by the name of John Ruddy was part of the team that day and it is upon him our story focuses.

Scorer of 10 goals in approximately 50 senior games for the Club, little else was known about Ruddy until recently, when Reds supporter Kevin Farrell unearthed a few photographs which demonstrated that John’s descendants would come into possession of a mysterious ‘Souvenir Medal’ with no inference on its background – until now. 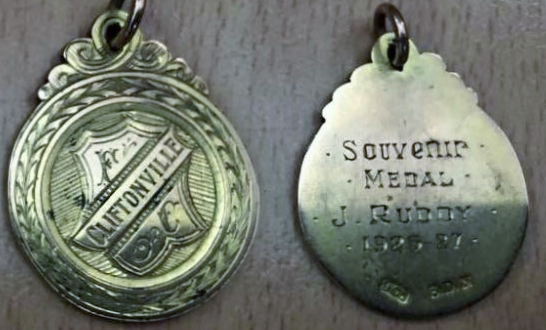 A talented junior footballer, Ruddy won the Junior Shield with Brookfield Strollers in the 1921/22 season and was an Intermediate Cup runner-up with Forth River the following year.

He first appeared in Cliftonville colours when he represented the Olympic side of 1925/26, when it seems he was also on the books of West End FC, with whom he won the 1927 Coolmore Cup – a trophy presented to the Irish Football Alliance 1st Division runners-up and which had the previous year been lifted by Lurgan ‘B’ Specials FC.

In that same season, Ruddy played his first game for the Reds’ senior side and, though most of his appearances would come the following year, it’s those 10 outings in the 1926/27 campaign that are of most intrigue to medal enthusiasts, badge aficionados and anyone with a deeper interest in the story of Ireland’s Oldest Football Club.

Research shows that, despite losing the 1927 Irish Cup Final to Ards, the Club commissioned gold medals for every player who had helped them reach the decisive stage of the competition. Though Ruddy did not play in that loss, his appearance in the semi-final defeat of Crusaders ensured that he – and future generations of his family – would come to own a rare artefact of Cliftonville history.

While it is not known how Ruddy’s career progressed after he last featured for the Reds in the 1928/29 season, he did enjoy Amateur International recognition in an Ireland side which also contained Solitude favourite Frank Mortished and which was coached by none other than Hugh McAteer, the man who led Cliftonville to the Club’s first League title and multiple trophy triumphs.