Barry Coffey’s debut for Cliftonville in last night’s 2-2 draw with Coleraine saw his name added to the list of players to have represented both the Reds and Celtic.

The Republic of Ireland Under-19 international, who is on loan from the Bhoys, extended a sequence started more than a century ago by John Wilson Blair.

The talented outside-right, who joined Cliftonville in 1903 and was a member of the side which shared the Irish League Championship with Distillery three years later, won five full caps for Ireland during his time at Solitude.

After moving to Belfast Celtic in 1908, he would then transfer to their Scottish namesake and enjoyed spells with Motherwell, Belfast Celtic again, Shelbourne and the Whites before ending his career back where it all started.

In 1944, Charles Patrick Tully (above) was struggling to break into a very strong Belfast Celtic team and, in a bid to garner better match experience, spent 10 games on loan with Cliftonville before returning to make the grade at both Celtic Park and its Glaswegian bigger brother.

An injury crisis threatened to disrupt the Reds’ preparations for their 1992 Gold Cup semi-final against Ballymena United and, amid rumours of a loan move for Celtic striker Charlie Nicholas, former Bhoys favourite Frank McAvennie (below) was duly unveiled. 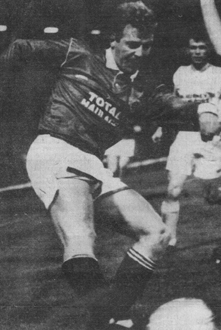 He helped us to a 2-1 victory but, by the time the Final with Glentoran came about, he had already returned for a second spell with the Hoops.

Gary Higgins was snapped up by Celtic at a mere 15 years of age and, though a leg-break denied him the opportunity to realise his dreams in green and white, it didn’t hamper him from going on to become a firm favourite in Red.

If Bhoys fans felt Martin Hayes failed to live up to expectations following a £650,000 move from Arsenal, imagine how Cliftonville supporters recall his short-lived tenure at Solitude!

Midfielder Tony Shepherd (a member of the same Hoops squad as Sandy Fraser, who had the briefest of spells with the Reds in 1995) progressed from the Celtic Boys Club and went on to be part of the Cliftonville team which won the 1997 County Antrim Shield.

The Republic of Ireland’s 1998 European Under 19 Championship winning skipper Gerard Crossley also represented both Clubs – and former Cliftonville boss Gerard Lyttle was sent off in a 1-1 draw with Rangers Reserves in front of 30,000 punters at Ibrox!

Diarmuid O’Carroll (above) spent five years with the Bhoys from 2003-08 before playing for the Reds between 2012-2014, while Deaglan Bunting – once a key member of the Hoops’ underage set-up – made one appearance for the Reds in January 2012 and Paddy McNally won a Premiership title with Cliftonville on loan from Celtic during the 2013/14 campaign.

Midfielder Paul George was with the Scottish giants from 2008 until 2015, signing up at Solitude later that year, while current Hoops goalkeeper Conor Hazard came through the Cliftonville Academy, although he did not make a senior appearance at the Club.

Coffey, who enjoyed first-team experience during Celtic’s preparations for the 2019/20 campaign, became the latest to wear both badges when he was one of three players handed debuts by Paddy McLaughlin for last night’s encounter at The Showgrounds, where he impressed before being replaced by Michael McCrudden after 77 minutes.