For it was on November 15, 2010 that the Reds took on Bolton Wanderers to mark the official opening of Solitude’s new 3G facility.

The English Premier League side, who featured the likes of Ivan Klasnic, current Chelsea defender Marcos Alonso and Leeds United’s recent £27m signing Rodrigo as well as boss Owen Coyle, won 2-0 courtesy of strikes of former Croatian international Klasnic and an outrageous effort from Coyle himself before Cliftonville were denied a late consolation when Stephen Garrett saw an attempt superbly kept out by Adam Bogdan. 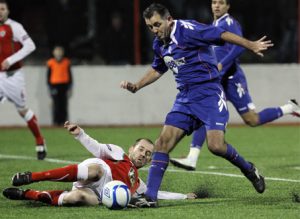 Owen Coyle is stopped in his tracks by Ronan Scannell

Speaking to cliftonvillefc.net after the game, Coyle needed no reminding about his previous encounter with the Reds and revealed that, since scoring for Airdrie in a 1991 friendly, he had kept a regular check on the Club’s progress.

“I know that, as a club, Bolton Wanderers were honoured to be asked to come across and re-open the stadium and I’m delighted we have been able to do that,” he said. 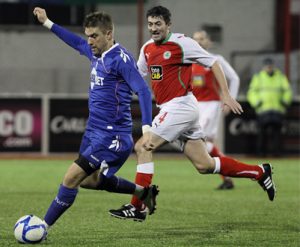 Ivan Klasnic gets away from Peter Hutton

“It was nice for me personally, though, because I’ve played against Cliftonville before and they actually beat us 3-2.

“I remember the game well – it was played at Airdie’s training ground in Bishopbriggs and Cliftonville, whose game with Kilmarnock had been cancelled at short notice, weren’t really very organised and were sort of rushing around trying to get themselves ready.

“My goal was a bit of a cheeky one because I don’t think Cliftonville were fully up to speed with the new backpass ruling which had just been brought it and, when the keeper picked one up, I told him to give me the ball and, when he did, I knocked it past him!

“Really, Cliftonville have always been my team in Northern Ireland and I’m really pleased to see them able to open such a fantastic pitch and it’s a really nice stadium, it has a real feel to it. 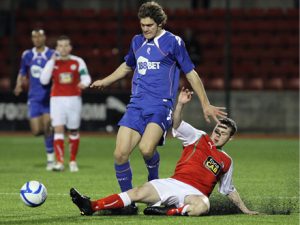 Martin Jones nicks the ball away from Marcos Alonso

“I know some people have their different opinions over surfaces like this but, to be honest, I have no problem with it whatsoever. You have to be good to play on it, though, because if you don’t get your passes perfectly timed and weighted, then it’ll zip away from you.

“If I had any concerns over people getting injured or anything like that, I wouldn’t have played on it myself or brought over people like Ivan Klasnic, Robbie Blake or young Adam Bogdan.

“We have Rodrigo Moreno on loan from Benfica and he’s had a great game, plus Marcos Alonso, who played for Real Madrid last season, so I think that shows what sort of faith I have in this kind of a pitch, it’s no problem at all for me.

“I really hope it proves a success for Cliftonville and helps them bring in some much needed finances because I know every penny and every pound counts at this level of football and I really sincerely wish them well with it.

“They’re a great Club with a fantastic history and I wish them all the luck in the world.”