Today marks another notable anniversary for aficionados of all things Cliftonville, with 141 years having passed since the Club’s first ever match. 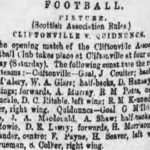 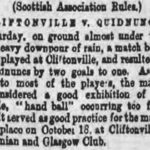 It was nevertheless an historic occasion in the history of Irish football, with Cliftonville going on to face Scottish team Caledonian and Glasgow before recording their first ever win when Knock (who were also founded by John McCredy McAlery) were beaten 2-0 on November 1 of the same year.