A lot is made of the supposed hoodoo that hangs over Cliftonville’s Irish Cup ambitions and anyone who remembers the 1988/89 season will know precisely why.

For while the Reds reached the competition’s semi-finals, boss Billy Sinclair’s options were limited by no fewer than SIX players nursing broken legs.

Continuing a retrospective series examining noteworthy seasons in the Club’s history, cliftonvillefc.net today reflects on the facts and figures behind yet another term that left players and fans alike wondering what might have been.

After a 1-0 win over Sligo Rovers on August 5, Cliftonville slipped to a 2-1 reverse at the hands of Finn Harps the following day.

A 3-1 win over Downshire, 8-1 hammering of Castlewellan and goalless draw with Ballyclare Comrades completed a spate of away games ahead of a Colin Swifts Select XI being defeated 3-2 at Solitude.

Midway through the season, the Reds recorded a 4-1 win against Banbridge Town and, as well as returning to Castlewellan for a 3-1 victory five days before Christmas, overcame Newington 2-0 a few weeks later.

That would, however, prove to be the team’s one and only win in the competition; a Peter Murray hat-trick earning a 3-3 draw with Distillery at Solitude ahead of the group schedule ending in a 3-2 loss at Glenavon.

Even so, those results proved sufficient to earn a quarter-final slot, where Glentoran made light work of their visitors in a 3-0 success.

Murray would find the net in three consecutive games as the Reds’ attentions turned to the Gold Cup but, unfortunately for both him and his team-mates, his efforts yielded just a single point with Bangor and Distillery inflicting 2-1 defeats either side of a 1-1 draw with Portadown at Shamrock Park.

A 2-0 loss to the Glens and 1-1 stalemate with Glenavon meant Cliftonville’s chances of progressing from the group stages were dented long before a 2-1 win over Ards and 1-1 draw with Newry Town.

The team exhibited more encouraging form when the League Cup came around; a 5-2 home victory over pre-season opponents Ballyclare teeing up a second round clash with Ballymena United, who were beaten 1-0 thanks – inevitably – to Murray finding the net.

Linfield would, however, prove much too strong in the quarter-finals, with a 3-0 reverse inflicted at Windsor Park.

It was not until October 29 (almost a fortnight later than this season’s Covid-delayed starting date) that the Irish League got under way with a 4-0 thumping of Distillery at Solitude.

After slipping up against Glenavon (2-3), however, draws with Glentoran, Ballymena and Ards preceded a 2-1 loss to Carrick Rangers before a Mickey McDonald goal got Cliftonville back to winning ways in a North Belfast Derby defeat of Crusaders.

Though Newry were overcome the following week, the Reds struggled for any kind of consistency and endured a frustrating festive season that delivered 1-1 draws with Portadown and Coleraine ahead of losses to Linfield and Bangor.

The team’s first win of 1989 came when Ballymena were beaten 4-1 at Solitude and the following couple of months included a number of other high-scoring successes, with Ards (4-0) and Carrick (5-1) comfortably disposed of.

Repeated failure to build on those triumphs was a key factor in the Reds’ failure to make serious inroads up the table, although they did end the season in bright form thanks to back-to-back wins away to Portadown (1-0) and Distillery (4-0).

Though beaten 2-1 at home by Newry, a 3-0 win in the second leg at The Showgrounds set up a quarter-final date with Linfield that ended in familiar heartache as the Blues progressed 4-2 on penalties following a 1-1 draw. 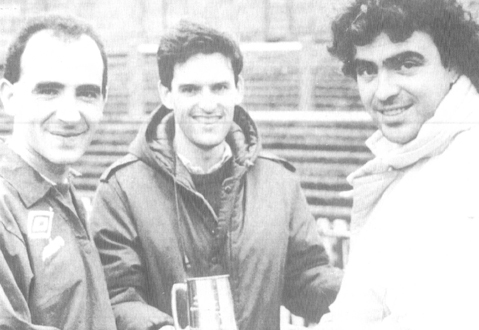 Tommy Breslin picks up a Player of the Month award

Another win over Newry – 2-1 on this occasion – got the Reds up and running in the Irish Cup, where a solitary Tommy Breslin effort got the better of Park in the second round.

A replay was required to see off Tobermore United in the quarter-finals, but it was under similar circumstances that an injury-ravaged Cliftonville exited the competition at the penultimate stage; a 2-1 defeat by Larne coming four days after the sides had drawn their initial encounter 1-1.

The final knockout competition of the season saw the Reds comfortably dispose of Comber Rec 3-0 at Solitude, only for their last shot at silverware to be snuffed out when Ballymena won by the same scoreline in the last-eight.

In Review
Cliftonville finished seventh in the 14-team Irish League, above Carrick Rangers on goal difference, 29 points behind Champions Linfield and 24 ahead of bottom-placed Distillery.

Tommy Breslin appeared in 49 of the Reds’ 51 fixtures across all competitions, marking him out as the team’s most regular performer ahead of goalkeeper Paul Prentice, defender John Muldoon (both 47) and his fellow midfield maestro Peter Murray (46).

Murray finished as the team’s top scorer with 17 goals to his name, with Noel Hamill (11) and Frankie Maguire (10) his nearest challengers.