Regular readers of our Matchday Magazine will know all the facts and figures behind each new week at Cliftonville Football Club, while our Twitter followers are regaled with daily delves into the archives – and today provides a particularly significant anniversary worth celebrating.

For it was on August 21, 1948 that the legendary Kevin McGarry made his debut for the Reds.

A 1-1 draw with Ballymena United in a City Cup tie at Solitude 72 years ago today saw McGarry make the first of 301 appearances for the Club, with contemporary reports noting the arrival of the “nippy inside-right” from Belfast Celtic.

Having made only a fleeting impression with the Hoops, it was at Cliftonville where McGarry would make his name, with the first of his one-time Club Record goal haul coming in just his second outing; a 5-5 draw with Portadown at Shamrock Park five days later.

Over a 13-year association that also included brief sojourns with Sligo Rovers and Dundalk, McGarry would net a total of 170 times for the Reds – a tally surpassed only by Joe Gormley – with his final strikes coming as a double in a League encounter with Bangor on March 4, 1961.

After seeing out his playing career with Limerick, McGarry – the inaugural Ulster Footballer of the year (1951) who scored once in three full international appearances for Ireland, netted 11 times from 15 Amateur caps, hit 12 goals in 15 outings for Irish League representative sides, played twice for an Irish FA XI and turned out for Great Britain at the Helsinki Olympics in 1952 – returned to Solitude as Manager and also served on the Club’s Management Committee before being elected Cliftonville FC President. 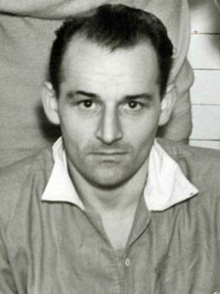