Regular readers of our Matchday Magazine will know all the facts and figures behind each new week at Cliftonville Football Club, while our Twitter followers are regaled with daily delves into the archives – and today provides a particularly significant anniversary worth celebrating.

For it was on August 20, 1988 that goalkeeper Andy McClean marked his Reds debut by scoring the winner in an Ulster Cup clash with Linfield at Windsor Park.

Ahead through Peter Murray’s penalty, Cliftonville conceded two Martin McGaughey goals either side of the interval before Francis Harrison made it 2-2.

Then came McClean’s magic moment when his long kick upfield bounced over an unsure Blues’ defence and beat former Northern Ireland international keeper George Dunlop, who could only look on as the ball clipped the underside of the crossbar and dropped over the line.

As a contemporary report noted, “everyone waited in disbelief until referee Andy Ritchie pointed to the centre-spot”, sparking scenes of wild celebrations among the Red Army on the Spion Kop (below). 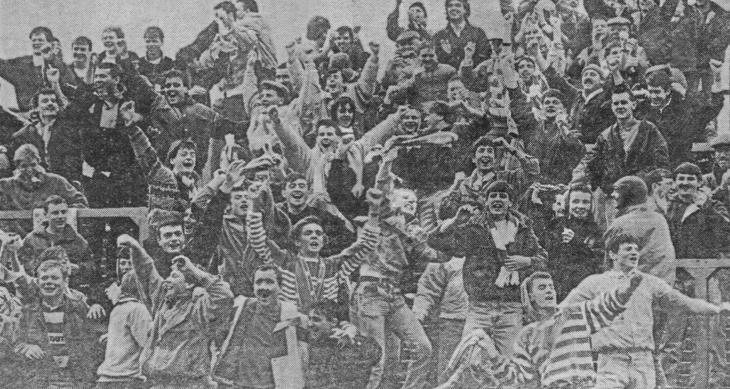 McClean would play only three further times for Cliftonville – and moved on with a one-goal-in-four-games record that many outfield players would be proud of – but he was neither the first nor the last goalkeeper to find the net for the Club.

Back in the 1970s, and prior to his legendary role as an Irish Cup winner, Brian Johnston was honing his trade with the Olympic but saw his place in the team taken by first-team stopper Harry McKibben for a game in Dunmurry.

Having arrived at the interval to spectate the second-half, Johnston learned that the Reds had actually been playing with 10 men as two players had failed to report for duty. He was swiftly slotted into a right-wing role and scored twice to earn a 2-2 draw – and was also on the scoresheet a few years later when he was handed the number 9 jersey for a B Division fixture against UUJ, marking him out as something of a prolific scorer among keepers deployed in outfield roles!

In 1982, Bobby Carlisle (above) hit an audacious dropkick in a 1-1 draw with Distillery at New Grosvenor and repeated the feat a year later against Carrick Rangers at Taylor’s Avenue but, much to his frustration, the strike was officially credited as an own goal after the ball took the slightest glance off a defender’s head.

For generations, fans have bemoaned Cliftonville’s lack of reliability when it comes to penalty kicks. Be it in-play awards or cup shoot-outs, there is a perception that Reds players suffer from a particular inability to find the net on a consistent basis.

Such was definitely true in the mid-90s. Indeed, so poor was the team’s record from the spot that goalkeeper Paul Rice eventually found himself next in line for the role and kept his cool to slam past opposite number Wes Lamont in a League clash with Linfield at Windsor. Minutes later, however, he too would succumb to the curse when Cliftonville were awarded a second penalty only for Lamont to save on this occasion.

Despite that miss, Rice (above) would retain responsibility and scored his second goal of the season a couple of months later in an Irish Cup reverse against Glenavon at Mourneview Park.

Near-namesake Paul Reece almost joined the exclusive club during a post-season charity game against Newry Town in 1998 but his spot-kick was saved by none other than Paul Straney, who was by coincidence next to join the merry band.

With Cliftonville’s Premier League status all but secured thanks to a 3-0 away win in a Play-Off with Armagh City in 2004, the return match at Solitude was something of a dead rubber that was nevertheless lit up with a moment’s excitement when Straney’s kick-out got the better of Niall Currie at the other end of the park – although had the adjudication panel that ruled against Bobby Carlisle 22 years earlier been in attendance, the popular keeper’s celebrations (below) may have been cut short!

Since then, just one Reds custodian has got his name on the scoresheet – although it’s difficult to believe that almost a decade has passed since John Connolly’s memorable strike against Linfield.

Leading 2-1 going into the closing stages at Solitude in December 2010, the Reds were awarded a second penalty of the night and, though Ciaran Caldwell had successfully converted the first, he had since been substituted and so Connolly (below) was summoned towards the Cage End, where he duly rifled home with glee to put the seal on things.

So who will be next? Richard Brush has certainly proven himself adept at repelling spot-kicks, but would he back himself from 12 yards or should we perhaps look to youngsters Declan Dunne or Declan Breen as the next candidates for Cliftonville’s goalscoring goalkeepers contingent?