Regular readers of our Matchday Magazine will know all the facts and figures behind each new week at Cliftonville Football Club, while our Twitter followers are regaled with daily delves into the archives – and today provides another notable anniversary.

For it was on August 17, 1946 that former Manchester United goalkeeper Jack Breedon took charge of the Reds for the very first time and, thanks to the efforts of Club Heritage Development Officer Paul Treanor and long-serving Matchday Magazine vendor Peter Sammut, cliftonvillefc.net today carries excerpts of a recently-unearthed interview the outspoken Yorkshireman gave to The Ulster Sports Gazette shortly after his appointment.

Born John Norman Breedon on December 29, 1907, he worked as a miner while representing hometown side South Hiendley at amateur level before an impressive performance in an exhibition fixture with Barnsley in 1928 earned him a move to Oakwell, from where he was plucked by English First Division Champions Sheffield Wednesday two years later.

When a serious wrist injury looked to have brought a premature end to his career, Wednesday hastily offloaded him to Manchester United, where his displays were so consistently good that he earned wartime international representation as part of a British XI that took on an English League Select team.

Contemporary reports note that “throughout his career, Breedon studied the game with a view to one day becoming a Manager” and was understood to be a forward-thinking coach with a dynamic philosophy – so quite how he came to take charge of the amateurs of Cliftonville remains a mystery.

That, however, is precisely what happened when, after retiring from playing in the aftermath of a brief stint at Burnley, Breedon turned down an offer from New Brighton FC before eventually relocating to Belfast.

“I would describe the fare served up as being of a very mediocre standard,” was his surmisal of the Irish game, with only Belfast Celtic and Linfield Swifts earning his compliments.

Complaining that players – especially those of the one-footed variety, whom he appeared to particularly dislike – did not do enough to improve their own abilities, he outlined his desire for the Reds to adopt training methods similar to those employed by professional Clubs in England:

Sunday: Report at ground for bath and massage and to have knocks attended to;
Monday: No actual training but golf or long walk in the country are recommended;
Tuesday: Report at ground for track work, exercises and practice match;
Wednesday: Varied track work, exercises and use of ball for heading and trapping practice;
Thursday: Exercises and 10 all-out 30-yard sprints;
Friday: Half a dozen easy sprints as a ‘pipe opener’ and plenty of skipping.

“Combined with the above,” he said, “is a strict regulation regarding ‘early to bed’. Throughout my career, I always endeavoured to be in bed every night before 10.45 o’clock.”

When it was suggested to him that his players’ day jobs would preclude them from undertaking such a schedule, Breedon simply harked back to his own personal regime when wartime air raids prevented him from attending training.

“I donned sweater and flannels and covered five or six miles on the open road, walking and running with a few sharp sprints in between,” he explained.

“When I arrived home from this, I did some exercises, some skipping and finished off with a hot bath.” 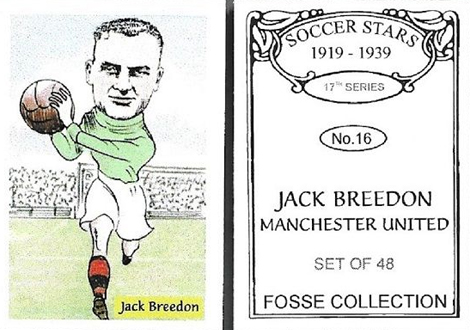 In a tale that will certainly keep youngsters in the vicinity of Solitude on high alert when Paddy McLaughlin is around, Breedon also recalled an occasion when his natural desire to improve a player’s ability led to him interrupting a daytime kick-around.

“The other afternoon on the Cliftonville Road, I watched two boys aged about 10 kicking a ball about,” he said.

“One of them, no matter in what direction the ball came to him, always moved to kick it with his right foot. I spoke to him about trying his left foot on occasions; he answered that he seldom did this. The few times he had tried it, he had not the same confidence as he had with his right – or ‘good’ – foot.

“I advised him that with plenty of practice, left foot kicking would soon be easy and he would never in the future be termed a one-footed player.”

Traditional fairytale etiquette dictates that the young boy in question would grow up to become a superstar but, unfortunately, there doesn’t appear to have been such a happy ending in this case – which in itself somewhat embodied Breedon’s time at Cliftonville.

For despite his revolutionary outlook, his team lost 40 of their 47 fixtures during the 1946/47 season, winning just three times and finishing 11 points adrift at the bottom of the table in a campaign that saw the Reds field a staggering 52 players, including seven goalkeepers – who contrived to concede 183 times between them!

As Heritage Development Officer Paul Treanor remarks, it is not surprising that Breedon felt his talents were better appreciated elsewhere and, though little was previously known about his spell at Solitude (indeed, it doesn’t receive a single mention on his Wikipedia page), we are today pleased to salute his efforts on this 74th anniversary of his first game at the helm – an entirely predictable 2-0 defeat in a Gold Cup tie at Coleraine.

A man whose commitment could never be questioned, Breedon passed away in 1967 at the age of just 59 but will forever be a colourful part in the story of Ireland’s Oldest Football Club.