Commencing a new weekly series saluting some of the most celebrated names in Cliftonville history, cliftonvillefc.net today delves into the Club’s Hall of Fame to recall the heroic exploits of former striker Chris Scannell.

The inaugural inductee to the John McCredy McAlery Hall of Fame in acknowledgement of his retirement in May 2014, Scannell scored 153 goals in his 456 appearances for the Reds and bowed out second in the Club’s all-time goalcharts – a position from which he has since been usurped thanks to modern day legend Joe Gormley. 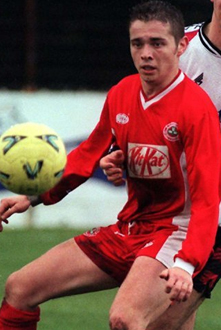 Signed from Crumlin United, Scannell was a consistent goal-getter during his maiden campaign with the Reserves and it was his exploits for the Olympic which alerted then-boss Marty Quinn to his capabilities and the young striker was handed his senior debut in a 1-0 defeat to Ballymena United on September 1, 1998.

It was, however, under the management of Laurence Stitt that Scannell really started to demonstrated his prowess and, as well as routinely finding the back of the net on the domestic scene, also registered a European goal when the Reds hosted Tiligul Tiraspol in a 2001 InterToto Cup tie – his early effort (above) taking the contest to Extra Time, where nine-man Cliftonville eventually succumbed to their Moldovan opponents.

While that would prove his solitary strike on the continental stage, Scannell’s contribution in Europe would extend to record-breaking nights that saw the Reds overcome FC Dinaburg of Latvia in 2007 and, perhaps most famously of all, HNK Cibalia three years later, when our inspirational no. 9 captained the team to an incredible Europa League success over the highly-fancied Croatians. 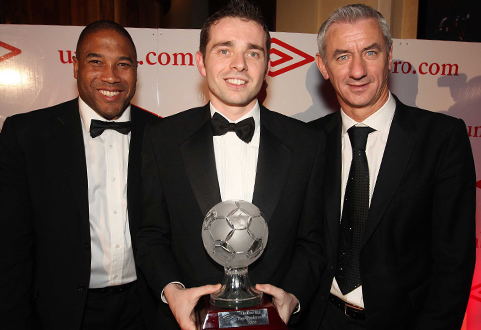 Commemorating his induction to the John McCredy McAlery Hall of Fame, Chairman Gerard Lawlor paid tribute to Scannell’s dedicated service throughout the years and highlighted what was arguably the finest season of his career when, at the end of the 2008/09 campaign, he landed personal accolades in the form of the NI Football Writers’ Association Player of the Year gong, the Ulster Footballer of the Year award and the Premiership’s Golden Boot honour.

In addition to being one of only five players in Cliftonville’s history to have ever broken the 100-goal barrier, Chris also proved his worth on the representative stage when, as part of the Irish League XI which tackled Manchester United in Harry Gregg’s Testimonial in May 2012, he pounced to crash home a trademark header (above) to cancel out Michael Owen’s early opener at Windsor Park.

Despite suffering an Achilles tendon tear in a Premiership clash with Glentoran three months later, Scannell had already set the wheels in motion for the Reds’ first League title success in 15 years thanks to an injury-time winner against Glenavon on the opening day – a penalty kick which would prove his last goal for the Club.

He returned to action on the final day of the 2012/13 season and afterwards helped get the party started by joining George McMullan in raising the Gibson Cup on high – a feat he would enjoy repeating 12 months later as he added a second League-winners’ medal to the three County Antrim Shield gongs pocketed in 2007, 2008 and 2011.

Recognising his talent, dedication and immense contribution over 16 seasons, Reds supporters demonstrated their appreciation for Scannell’s efforts throughout a memorable career by handing him the proud distinction of becoming the first ever entrant to our Hall of Fame – alongside eponymous pre-existing member McAlery – and the Club were only too delighted to endorse this achievement.

Dates for your diary