Regular readers of our Matchday Magazine will know all the facts and figures behind each new week at Cliftonville Football Club, while our Twitter followers are regaled with daily delves into the archives – and today provides yet another notable anniversary.

For it was on July 17, 2010 that the Reds took on FC United of Manchester in the first Supporters’ Cup match.

An annual fixture between fan-owned Clubs, the contest operated on a winner-stays-on basis, with Cliftonville victorious in all three years of the competition’s existence thanks to subsequent victories over Stirling Albion and Swansea City.

It all started a decade ago today when, less than 48 hours after defeating HNK Cibalia in the Europa League, the Reds welcomed FC United to Donegal Celtic’s Suffolk Road home for an entertaining encounter that saw Ciaran Caldwell – the goalscoring hero of that continental success – twice find the net.

Mike Norton had given the Evo-Stik Northern Premier League side a 19th minute lead and, though Liam Boyce and Ronan Scannell went close to levelling, the closest either side came to another goal in the first-half was when the visitors’ Chris Ovington struck a post.

A raft of half-time substitutions and change of formation would, however, set the Reds on course for a comeback, with Caldwell making it 1-1 five minutes after the break and then striking the winner after good work between Boyce and Chris Scannell.

The win meant the Reds would defend the trophy 12 months later, when Stirling’s Doubletree Dunblane Stadium played host to the second installment of the Supporters’ Cup and things looked to be running very smoothly for Tommy Breslin’s side until the Scottish Second Division outfit threatened a late comeback. 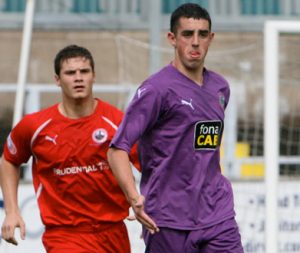 Hopes of a home recovery were dashed shortly after the break when Gormley raced clear to dink the ball over the head of goalkeeper Sam Filler, after which a host of changes for both sides diluted the rhythm of the contest and saw Albion reduce the arrears through Darren Smith.

The hosts took control for the final half-hour and almost equalised courtesy of Josh Flood in the final minutes only for Jack Duffin to make a superb trophy-saving stop.

All of which meant that the Reds would defend the trophy again the following year, with a Swansea XI visiting Solitude – and, having overcome English and Scottish opposition in previous outings, Cliftonville duly completed the hat-trick by getting the better of the Welsh side just days before the start of the new Danske Bank Premiership season.

Visiting keeper David Cornell’s heroics saved the visitors from a more comprehensive defeat and, though there was nothing he could do to stop Boyce’s thunderous 10th minute strike, he caught the eye with saves from Gormley and Martin Donnelly.

Daniel Allen headed against the bar for the Jacks, with Boyce, Diarmuid O’Carroll and Eamonn Seydak all seeing efforts repelled by the impressive Cornell as Cliftonville made it three wins from three Supporters’ Cup outings.