Anniversary seasons often bring their own unique pressures but it’s evident that, despite a rocky start, the Cliftonville team of 1954/55 were not unduly impacted by the weight of any heightened expectations.

Little was expected of a side that had finished bottom of the table the previous year and, though their campaign began with 10 straight defeats, they did demonstrate a glimpse of their ability with an impressive 2-2 draw against Celtic in the Club’s Diamond Anniversary Fixture; Davy Lawther and Richard Williams on target.

Continuing a retrospective series examining noteworthy seasons in the Club’s history, cliftonvillefc.net today reflects on the facts and figures behind a campaign tinged with tragedy when George Ferrett – the only man to have bossed the Reds in three separate stints – passed away just a few months after being replaced in the hotseat by Arthur Woodruff.

Woodruff’s tenure as Manager got off to an inauspicious start, with a 4-0 defeat to Ballymena United being followed up by heavy losses at the hands of Crusaders (1-5), Derry City (2-5), Glentoran (0-5) and Coleraine (0-5) as Cliftonville endured a miserable Ulster Cup campaign.

Things showed no signs of improvement when the City Cup commenced with a 3-1 reverse at the hands of Glenavon on September 11, with Ballymena United (0-1), Ards (0-5) and Coleraine (2-3) inflicting further defeats before the Reds registered their first point of the season courtesy of a goalless draw with Distillery on October 16.

Though that was followed up by a 2-1 loss at Bangor, an own goal helped Cliftonville to their maiden victory when Portadown were overcome 1-0 at Solitude.

That result sparked a slight upturn in form, with a 1-1 draw against Glentoran at The Oval subsequently built upon by a 4-1 win over Derry on a day that saw Bruce Shiells and Kevin McGarry both at the double.

Though beaten 4-2 by Linfield next time out, the Reds recovered with a 1-0 triumph in the North Belfast Derby with Crusaders, which provided a further boost to confidence ahead of the team’s opening fixture of the Irish League programme.

Amid that City Cup schedule came Cliftonville’s sole outing in the Gold Cup; a 2-1 loss away to Glentoran.

It was on December 4 that the new League season kicked off with an entertaining 3-2 win at Ballymena.

A 1-1 draw with Ards and 3-1 defeat of the Glens may have been followed by a narrow reverse at the hands of the Crues, but the team had by this stage started to develop a knack of recovering from setbacks, with eye-catching wins against Portadown (5-4), Bangor (5-1), Derry (5-1) and Ards (5-4) sprinkled throughout the winter.

Having discovered their scoring touch, Woodruff’s men enjoyed a 4-1 win at Seaview – where Shiells banked a hat-trick – and 5-0 hammering of Bangor before concluding their League campaign with a 2-0 triumph over Distillery at Solitude and 1-1 draw away to Glenavon. 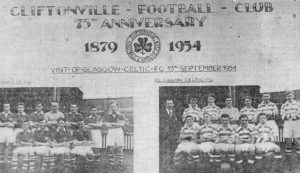 Another cup competition, another fall at the first hurdle; Ballymena United this time enjoying a 2-0 win in a replay after a goalless first meeting.

It’s perhaps fitting that Cliftonville’s only win in knockout cup football came in a 4-2 defeat of Larne that also doubled up as a memorial to former Manager George Ferrett, who had died just a week earlier.

That would, however, be the end of the team’s interest in the tournament, with eventual winners Dundela seeing them off in the second round.

It’s arguable that the Reds’ best hope of marking their 75th Anniversary with silverware came via the Pioneer Cup but, unfortunately, Bohemians took the honours with a 1-0 win at Solitude in late April.

There’s no question that the most glamorous of the five friendlies Cliftonville played during the 1954/55 term was the Diamond Anniversary encounter with Celtic on September 13 – which, curiously, finished 2-2 despite Woodruff’s side finding themselves in a run of 10 consecutive domestic losses.

In April, meanwhile, a fundraiser for Oldpark YMCA saw the Reds beat Kyle’s XI 4-0 in what appears to have been a game that fused both football and rugby (with a contemporary report referencing that “a Cliftonville defender almost collapsed” after heading the point of a rugby ball) while, at the end of the campaign, the team would also face Ards (0-2) before inflicting a 9-1 thumping on an Isle of Man XI.

A 2-0 win over BEA International sent the Reds through to the Final of the BEA Cup but, faced with the prospect of lifting a trophy in the final outing of their Anniversary Season, they fell to a 2-1 loss against Bishop Auckland.

In Review
Cliftonville finished third in the 12-team Irish League, 12 points behind both runners-up Glenavon and Champions Linfield.

Denis McCurley was the only player to feature in all 43 of the Reds’ fixtures, with goalkeeper Ossie Baillie (40) and Ernie McClearly (39) his nearest challengers in the appearance stakes.

Top goalscorer was Kevin McGarry, whose 17 strikes were enough to get the better of Bruce Shiells by just one.