One Cup Final victory and one Cup Final loss told the story of Cliftonville’s 1886/87 campaign, when the FA Cup was the only competition the team failed to reach the decider of.

In an era that pre-dated the advent of League football, the majority of the Reds’ campaign was occupied with friendlies that saw a host of opponents make the journey from Scotland to Belfast.

Continuing a retrospective series examining noteworthy seasons in the Club’s history, cliftonvillefc.net today reflects on the facts and figures behind the term that saw Cliftonville claim a record victory that stood for 130 years just a fortnight after falling to their all-time heaviest defeat.

Of Cliftonville’s 30 fixtures during the campaign, 19 were friendlies – starting with 6-2 and 4-2 home wins over Ayr Vulcan and YMCA, respectively.

Edward Turner netted a hat-trick when Linfield were beaten 4-0 on October 16, while Jack Barry was the Reds’ scorer in a 4-1 defeat at the hands of Rangers.

Further highlights included a 7-0 victory over Clarence, a 5-4 triumph against English YMCA and a wildly entertaining 6-4 success in a contest with Glaswegian visitors Cowlairs.

The team’s first competitive outing was a 2-2 draw with Blackburn Park Road on October 9, with Turner (4) and Barry (2) scoring in addition to an own goal as the Reds triumphed 7-2 in the Belfast replay. 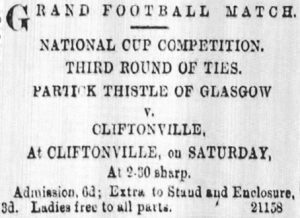 Bolton Great Lever were then dismissed 3-1 before the Club’s FA Cup interest was ended in emphatic fashion; Partick Thistle administering an 11-1 thumping that remains the Club’s heaviest ever loss.

Moltato’s withdrawal from the Irish Cup handed Cliftonville a First Round bye ahead of near neighbours Oldpark being beaten 2-0 in the next phase thanks to a double from Barry.

A 10-1 Quarter Final win over St Malachy’s College (which remained a Club Record victory until as recently as 2016) set up a last-four clash with Limavady United, who were overcome 2-0 on a day that saw Barry and Sam Baxter on the scoresheet.

All of which set up a decisive showdown with Ulster on February 12 when, despite Turner being on target, Cliftonville fell to a 3-1 loss.

Goals from Turner (2), W McPherson, Archie Rosbotham and Allan Elleman earned a 5-1 victory over Wellington Park as the Reds began their Charity Cup campaign in style before triumphing by the same scoreline against Linfield in the Semi Finals; Fred Brown netting a hat-trick in addition to single strikes from Turner and Barry.

YMCA awaited in the Final, with Cliftonville ending their season on a winning note when strikes from Brown and Barry (2) earned a 3-2 win to clinch the trophy.

In Review
Edward Turner and Fred Brown were the only players to feature in all 11 of Cliftonville’s competitive fixtures.

Turner’s 11 goals marked him out as the leading scorer ahead of nearest challengers Jack Barry (9) and Fred Brown (4).

There is currently no official record of who scored eight of the Reds’ 41 goals during the term.