Though the concept of promotion and relegation through the divisions is one with which we are all now wholly familiar, it was not until as recently as 1995/96 that the format was introduced to Irish League football.

Having secured their place in the inaugural Premier Division courtesy of their record over the previous two years, Cliftonville tantalised their fans with some high-scoring displays in the early-season Cup competitions before finding goals harder to come by in a campaign that delivered just 27 strikes in 28 League games.

That early optimism had, however, already been dampened by the death of Dr Kevin McGarry who, as well as still being the Club’s all-time leading goalscorer, had also been the Reds’ longest-serving player before fulfilling roles as Manager, Committee Member and President.

Continuing a retrospective series examining noteworthy campaigns in the Club’s history, cliftonvillefc.net today reflects on the facts and figures behind a term that yielded a new dawn for Irish League football – and, most importantly of all, saw the Reds finally end their long wait for silverware.

Pre-Season
Cliftonville’s warm-up schedule for the 1995/96 campaign actually began with a friendly against fellow Premier Division side Glenavon, who recorded a 2-1 win in the Bessbrook Tournament.

After beating Moyola Park 2-1, the Reds went down by the same scoreline against Hibernian in what, all these years later, is still remembered for being played on one of the hottest days ever endured at Solitude.

The competitive programme began with thumping 5-0 and 6-1 home wins over Limavady United and Bangor in the first two rounds of the League Cup, only for the Reds’ interest in the competition to be ended at the Quarter Final stage when, following a 0-0 draw, Crusaders claimed a 3-0 penalty shoot-out victory towards the end of August.

The Ulster Cup may not have started with quite so much promise thanks to back-to-back losses at the hands of Glenavon (0-2) and Distillery (0-1), but the Reds’ firepower was demonstrated once again in a 7-1 hammering of Ballyclare Comrades courtesy of a Ron Manley hat-trick and single strikes from Gerry Flynn, Gary Sliney, Tim McCann and Ciaran Feehan. 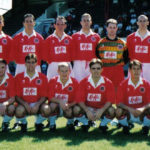 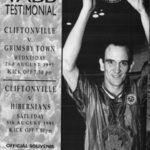 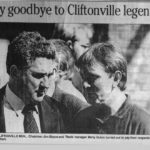 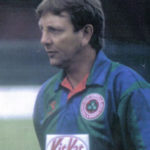 Just a week after that convincing triumph over the Comrades, Cliftonville began their Gold Cup commitments by putting four unanswered goals past Carrick Rangers, while a solitary Flynn effort was enough to see off Glentoran.

A 1-0 defeat to Larne on September 23 wasn’t enough to stop Quinn’s side progressing to the Quarter-Finals, which were held up until as late as mid-January thanks to an eligibility row involving Glenavon’s Marc Kenny.

Once that dispute had been settled, a McCann goal got the better of First Division side Ballymena United in the last-eight, only for Linfield to inflict a 2-1 loss in the Semi Final.

Not only did Cliftonville’s first ever Premier Division fixture – a Solitude tie with Ards on September 30, 1995 – finish 0-0, so too did their third and fourth outings (against Glentoran and Linfield, respectively).

In between times, however, Portadown inflicted a 6-1 thumping that was notable both for Sliney scoring our first ever goal in the new League and for being a Club Record loss that stands to this day.

The run of draws continued with a 2-2 stalemate against Glenavon, when Roddy Collins registering the Reds’ maiden Premier Division strike at home, and it actually took until the final round of opening phase fixtures before the team claimed their first win; Shaun Strang hitting both goals (including an opener after just seven seconds) in a 2-1 victory over Bangor on November 11.

In truth, Cliftonville’s League form was patchy to say the least and 3-0 losses to Ards and Portadown made way for another brace of draws – 1-1 away to both the Glens and Blues – before the team’s first triumph on the road saw Glenavon downed 2-1 thanks to late efforts from Ian McParland and Mark O’Neill just before Christmas.

The turn of the year did little to improve fortunes, however the odd win here and there – such as 1-0 home successes against Ards and Glentoran – generally kept the Reds’ heads above water during a spell that saw goalkeeper Paul Rice elevated to penalty taker, such was the squad’s apparent limitations from 12 yards.

No sooner had he assumed the role than he found himself on the scoresheet against Linfield at Windsor Park before, minutes later, seeing a second spot-kick saved!

By now comfortably clear of any relegation threat, April draws with the Blues and Glenavon lifted spirits before a Paul Stokes double earned a 2-1 win against Crusaders that saw our North Belfast Derby rivals relinquish their grip on the Gibson Cup, much to Portadown delight.

The term ended with an April 27 victory over bottom-placed Bangor, confirming a sixth placed finish that was sufficient to earn qualification for the InterToto Cup in the summer.

Though younger supporters may not necessarily believe it, a penalty shoot-out in the 1990s effectively meant defeat before a single kick of the ball and, having exited the League Cup from the spot against Crusaders earlier in the season, Cliftonville’s County Antrim Shield run lasted all of one game – a 2-2 draw with First Division Carrick Rangers ahead of the inevitable loss (4-3) on penalties. 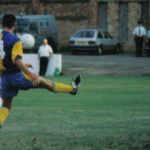 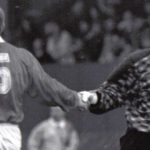 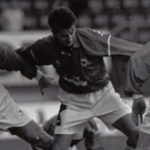 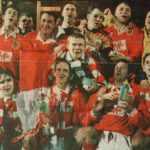 Cliftonville savoured their first trophy since 1980

If you exclude the McEwan’s Soccer Sixes of 1995 (and many do), not since the Gold Cup success of 1980 had Cliftonville savoured trophy triumph – a 16-year wait that was brought to a dramatic end on March 19, 1996.

The Reds’ Coca Cola Floodlit Cup campaign began with a 1-0 win over Omagh Town on St Julian’s Road on January 9, with a 1-1 draw in the home leg a fortnight later enough to set up a Quarter Final battle with Coleraine, which was won in comfortable fashion (3-0) thanks to a Stokes double and another Feehan finish.

Ards were beaten in the Semi Final on a night that is perhaps best recalled for the outrageous goal Sliney netted from the halfway line at The Oval, before Quinn’s battlers roared from behind to overcome the Glens in the decider; McCann, Jonathan Cross and Stokes sealing a 3-1 success.

After comfortably seeing off Kilmore Rec 3-0 in the Fifth Round thanks to goals from Marty Tabb, McCann and Mickey Donnelly, Cliftonville suffered a Sixth Round exit at the hands of Glenavon at Mourneview Park where, despite goalkeeper Rice scoring another penalty, the visitors were dispatched 3-1.

In Review
Cliftonville finished sixth in the eight-team Premier Division, 15 points ahead of relegated Bangor but 12 behind fifth-placed Linfield and some 27 off Champions Portadown.

Despite only arriving in mid-season, Paul Stokes was the team’s top scorer with 12 goals in 21 appearances; his strike in the final-day defeat of Bangor ensuring he finished one ahead of Ciaran Feehan, who joined him on the scoresheet at Clandeboye Park.

Though the Reds ended the campaign with a Premier Division goal difference of -21, their record in all competitions returned a result of +5.

Gerry Flynn made more appearances than any other player, missing just one of Cliftonville’s 47 fixtures – three ahead of closest challengers Paul Rice, Ian Hill and Tim McCann.