This unenviable record tells the story of Cliftonville’s exploits in 1964/65, a season that saw the team predictably finish bottom of the Irish League, some 14 points behind Ards.

Continuing a retrospective series examining noteworthy campaigns in the Club’s history, cliftonvillefc.net today reflects on the facts and figures behind a term that began with 15 straight defeats – which, remarkably, wasn’t the Reds’ worst losing streak over the course of the year!

The one positive for Norman Kernaghan’s side was a 3-0 away win over Glentoran that would prove to be Cliftonville’s last victory at The Oval for some 16 years but, such were the depths plumbed, it’s only by breaking the season down into competition-by-competition reviews that we can begin to appreciate quite how appalling a campaign this truly was.

The season began with a narrow Ulster Cup defeat at Derry City, but that 3-2 loss was followed by a 4-0 hammering at the hands of Glentoran before home reverses against Ballymena United (0-3) and Crusaders (1-3) preceded a 3-0 beating by Coleraine.

Gold Cup
Not content with five straight losses in the Ulster Cup, Cliftonville’s Gold Cup campaign lasted all of one match – an 8-2 drubbing by Derry at Solitude.

The arrival of the City Cup in early September did little to sway the Reds’ form and a quite staggering 35 goals were conceded in their first five outings in the competition.

Encounters with Derry (1-2) and Bangor (0-2) in the following weeks were closer fought, however a 7-2 thumping by Ballymena United would soon follow before a 3-0 defeat by Distilery was, out of nowhere, atoned by a 2-1 home win against Crusaders on November 14 – bringing an end to a run of 15 consecutive losses.

It did not, however, spark an upturn in fortunes, with the team’s City Cup schedule concluding with a 7-3 reverse at the hands of Portadown the following week. 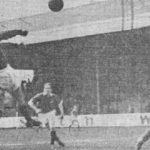 Imagery from the Reds' shock win at The Oval 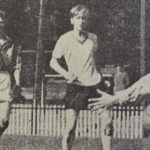 Contrary to the moden game’s calendar, the 1964/65 League programme did not begin until November 28 and it will come as no surprise to learn that the Reds kicked things off on a negative note – a 2-1 loss to Ards.

Things did not get any better in the weeks that followed, with Ballymena (1-3) and Portadown (0-4) inflicting further misery before Derry dished out a 10-1 hiding that, almost impressively, was not Cliftonville’s biggest losing margin of the campaign.

After ending December with fixtures against Crusaders (0-3) and Glenavon (2-3), any hope that the New Year might deliver some fresh promise was kicked into touch courtesy of a 5-1 beating by Linfield, while the nine League outings that would follow saw the Reds register just three goals…

Then, following 18 straight defeats (including an early Irish Cup exit that we’ll come to soon), they inexplicably overcame the Glens by three unanswered strikes at The Oval. Even if the players had known that no Cliftonville team would win at the east Belfast venue for the next 16 years, it’s unlikely to have dampened their celebrations.

Their League campaign would, however, conclude with five straight losses – Ards (2-4), Ballymena (2-8), Portadown (0-1), Distillery (0-4) and Derry (1-3) all adding their own further contributions to a thoroughlly miserable season.

Irish Cup
A 3-0 defeat away to Derry on February 2 was the long and short of Cliftonville’s interest in the tournament.

County Antrim Shield
One of the most remarkable things about the Reds’ shock League win against Glentoran on April 3 was that they followed it up with another success three days later – a 1-0 victory against Brantwood in the First Round of the County Antrim Shield.

Alas, just a further week would pass before they made their exit when, a few days after a 4-2 loss at Ards in the League, Cliftonville suffered the exact same fate in the Shield to guarantee (were it not already blindingly obvious) that there would be no silverware at Solitude this year.

Armstrong Beckett and George McKane were the goalkeepers who retrieved the ball from the back of the Reds’ next on average of four-and-a-half times per game, while the League’s joint-leading scorers were Glenavon’s Denis Guy and Coleraine’s Ken Halliday, who each struck 19 times – two more than Cliftonville managed.