Though the North Belfast Derby is always a riveting affair and the fixture’s festive instalment further adds to the sense of occasion, it’s unlikely that this Thursday’s Seaview showdown will be able to live up to the high standards set a decade ago.

For this St Stephen’s Day marks an incredible 10 years since Cliftonville emerged on top in arguably the most fascinating North Belfast Derby duel of all time; Liam Fleming’s late winner earning the 10-man Reds all three points against a Crusaders side that had four players and Manager Stephen Baxter sent off by referee Adrian McCourt.

It says everything about the madcap nature of the encounter that incidences such as George McMullan missing a penalty, Barry Holland furtively sporting his brother Mark’s jersey and matchwinner Fleming being involved in a car crash on his way to the game have been reduced to mere footnotes in the story of the day. 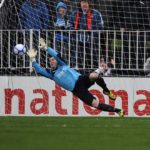 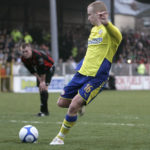 Liam Boyce opens the scoring from the spot 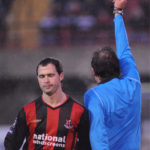 Davy Rainey was next to go

The drama started when Eamonn Doherty’s handball in the box earned Cliftonville a spot-kick, which the usually reliable McMullan saw repelled by home goalkeeper Chris Keenan – who was unable to repeat his heroics when Liam Boyce stepped up to take the visitors’ second penalty of the day following Colin Coates’ 37th minute foul on Chris Scannell.

The Crues were reduced to 10 men early in the second-half when Chris Morrow was dismissed for swinging a punch at McMullan, with team-mate Davy Rainey following him soon later after being shown a straight red card for dissent.

Home boss Baxter’s reaction to that decision earned him his marching orders and saw the uproarious crowd treated to the bizarre spectacle of the Shore Road chief angrily confronting referee McCourt on the pitch as he made his way across to the terracing on the opposite side of the ground.

Seemingly strolling to success, Cliftonville appeared constricted by the weight of the odds that had suddenly fallen in their favour and, after twice being grateful to keeper John Connolly for maintaining their advantage, contrived to throw their lead away when Jordan Owens pounced to make it 1-1 with 64 minutes on the clock. 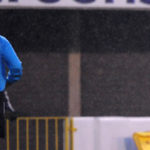 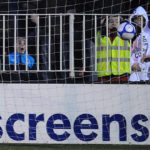 Ryan Catney and Aaron Black were dismissed after a clash 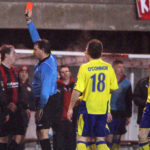 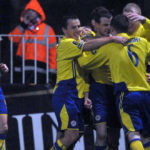 Liam Fleming is mobbed after his late winner

Soon later, however, the man in the middle was flashing his red card again when a scuffle between Aaron Black and visiting midfielder Ryan Catney saw both of them handed early exits before Ryan McCann’s horrible lunge on Holland led to him becoming the fourth Crues player given his marching orders.

It was understandable, then, that Cliftonville began to seriously dominate possession but, up against a well drilled defensive effort, they looked set to emerge with a single ignominious point until Fleming found just enough time and space to squeeze an angled drive beyond the despairing dive of Keenan and celebrate the final twist of an unforgettable – and, to date, unbeatable – Christmas cracker.

Seaview ticket sales
Supporters are reminded that the General Sale of tickets for this year’s St Stephen’s Day Derby is online only and no sales will be conducted by Cliftonville Football Club.