Congratulations to Cliftonville’s Under 12s, who returned from their weekend trip to Manchester with silverware and a host of golden memories from a hugely productive weekend.

After starting their trip at Manchester City’s Etihad Stadium, the Wee Reds enjoyed a tour of the English Premier League Champions’ academy training facilities and met England Woman’s captain Steph Houghton before being bade farewell by City boss Pep Guardiola as he set off for his Friday press conference.

Later in the day, Cliftonville travelled to Stalybridge Celtic to face the Evostick National League side’s Under 12 team and, after falling behind early on, responded superbly to pull 3-1 in front.

A late Celtic penalty reduced the arrears to just a single goal only for the Reds to make sure of victory – and the trophy – by adding to their tally in the closing seconds. 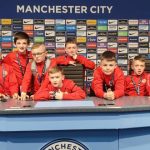 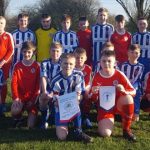 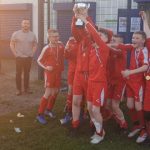 On Saturday, meanwhile, the players further celebrated their success at Old Trafford, where they took in Manchester United’s 2-1 win over Watford on a well-deserved day out for their considerable efforts over the course of the season.

A big well done is extended to our Under 12s and their dedicated coaches, while the players’ proud parents and families will no doubt be delighted to learn that their impeccable representation of Cliftonville FC earned compliments from the staff of both Manchester City and Stalybridge Celtic, who were suitably impressed by the team’s behaviour, enthusiasm and talent.