It’s long been said that, by playing for the name on the front of the shirt, supporters will remember the name on the back – but it’s just as accurate to surmise that recollections can also be stimulated by the branding emblazoned across the chest.

Just as a particular player or kit can become inextricably linked with a distinct era of a Football Club’s history, so too does a sponsor become an almost synonymous feature of footballing folklore.

Current backers Sean Graham are just the ninth shirt sponsors in the history of Cliftonville FC and it will come as no surprise for supporters to learn that the Reds, with their long and proud tradition of trailblazing endeavours, were the first Club in Ireland to sport advertising on their jerseys.

To celebrate the occasion of Langs Whisky’s association with Cliftonville, the Scottish company promised each member of the team a bottle of Scotch for every goal they scored in an October 1976 fixture with Ards – and John Platt duly netted every strike in a 4-0 win to ensure he and his colleagues were handsomely rewarded. 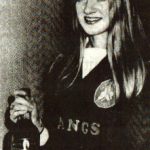 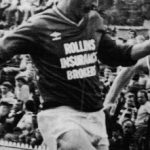 John Muldoon in action in 1984 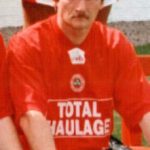 Club historian Paul Treanor notes that the Reds reverted to blank shirts for the next seven years, until Rollins Insurance Brokers commenced a four-season stint between 1983-1987.

The 80s ended with no sponsor until a one-off gesture saw Cliftonville turn out in a 1990 Gold Cup Semi Final with Total Haulage branding on their jerseys.

Despite the Reds’ defeat that night, the firm were evidently more than satisfied with the publicity they received because they returned in a full-time capacity the following season and remained in place until 1995. 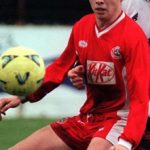 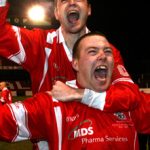 Liam Fleming and Declan O'Hara in 2006 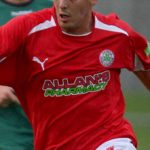 Chocolate brand Kit Kat became one of the most striking sponsors in Cliftonville history when they took over in the summer of 95 and, as well as being easily recalled because of the instantly-recognisable logo’s worldwide fame, retains a special notoriety for being the name on the shirts of the Club’s 1998 Premier League title winners.

In 2001, MDS Pharma Services – a global contract research organisation with a branch in Belfast – began a seven-year relationship that included the Reds’ first ever win in European action when FC Dinaburg were eliminated from the InterToto Cup in 2007.

By the next time Cliftonville entered a continental competition against FC Copenhagen the following summer, however, the name of Allans Pharmacy had commenced a two-year residency on the jersey before fonaCAB made its debut when HNK Cibalia were beaten on Europa League duty in 2010. 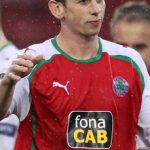 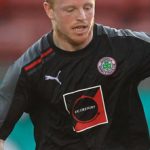 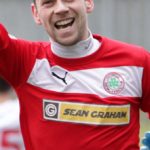 Though the Club began the 2012/13 campaign with no official sponsor, EG Freight’s emblem took pride of place on the players’ shirts for the European clashes with Kalmar – for which the Reds wore a specially-commissioned black strip and achieved the Club’s first ever Euro success at Solitude – ahead of our partnership with Sean Graham being signed and sealed a few weeks into what would become another Premiership title-winning term and which heralded the most sucessful era Cliftonville FC has ever known.

That association not only remains until today but was extended by a further four seasons this very week last year, taking the local bookmaker’s link with the Reds to a full decade – the longest sponsorship agreement in the history of Ireland’s Oldest Football Club.