It was a big weekend of firsts for the Cliftonville FC Ladies Academy, with a number of teams in action on the opening day of their respective seasons.

In addition to our Under 13s taking on Banbridge at Mallusk on Saturday morning, Erin Montgomery and Caitlin Magill were on the scoresheet when our Under 15s – many of whom were contesting their first ever 11aSide fixture – were defeated by Sion Swifts in their South Belfast Girls League opener on Friday night. 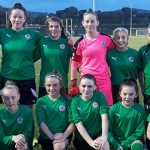 The Under 15s kicked their season off on Friday night 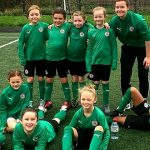 Some of our Under 9s were playing their first ever game

Our Under 11s (main image), managed by Louise Lewsley, stepped up to 7aSide level and produced a superb performance to get the better of Glentoran at Olympia Leisure Centre this morning, while Caoimhe Callaghan’s Under 9s fielded a number of girls who were playing their first ever game of football in overcoming the Glens at the Norman Whiteside Sports Facility.

Huge congratulations are extended to every player, coach and volunteer involved across the various age ranges of our Ladies Academy, who are always keen to recruit players.

From Under 9s right through to our senior side in the Danske Bank Women’s Premiership, we are proud to say our female sides have gone from strength to strength in recent seasons and if you’d like to get involved, we’d be more than happy to welcome you along.

All Academy squads (for players born between 2002-2010) train at the Club’s former base on the Cliftonville Road Cricket Ground opposite Solitude every Thursday (5.30-7pm), with anyone interested in signing up asked to contact Head of Academy Marissa Callaghan on 07706182378.