Cliftonville visted Right To Dream Park for a training session this evening as the countdown to tomorrow’s Europa League clash with Nordsjælland continues.

The Reds are based in Copenhagen for the second leg of this First Qualifying Round tie but made the short journey to Farum, where they were put through their paces in addition to familiarising themselves with the venue that will host their return date with the Danish Superliga side. 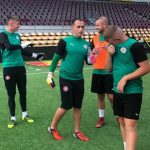 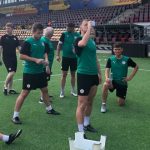 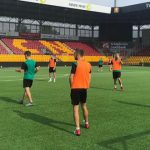 With a capacity of 10,300, Right To Dream Park – which was the first top-flight stadium in Denmark to install artificial turf – was previously known as Farum Park but was renamed in honour of Nordsjælland’s official partnership with the Right To Dream Academy in Ghana and has hosted a series of Under 21 international fixtures since 2000.