It was on April 18, 1998 that Marty Quinn’s side hosted Glentoran in their penultimate fixture of the season – one that controversially kicked off an hour before title rivals Linfield faced Coleraine at the behest of the Irish Football Association, who curiously issued their directive when IFA President and Reds Chairman Jim Boyce was out of the country.

A bumper crowd packed into Solitude for the occasion and the contest was barely a quarter of an hour old when home fans were sent into raptures by the outstretched boot of Harry McCourt, who reacted quickly to divert a Marty McCann effort beyond the despairing dive of goalkeeper Wayne Russell.

With a win sufficient to secure the Premier League Championship, Cliftonville were pegged back after the interval when Philip Mitchell rose highest to convert a corner kick delivery from Davy Rainey – and, try as they might, the Reds were simply unable to register a dramatic late winner, despite McCann, Jody Tolan and Barry O’Connor going close.

The final blast of referee Alan Snoddy’s whistle meant that all ears turned to The Coleraine Showgrounds, where the hosts were level with Linfield at half-time, an outcome that would be sufficient for the Gibson Cup to take residence at Solitude.

While a nervous Red Army sat glued to transistor radios for updates from the Blues’ game, an equally anxious Cliftonville team huddled together in their changing room, where they were kept abreast of details courtesy of the oohs and aahs from overwraught fans outside.

Unable to cope with the tension, some supporters left the stadium for a walk in their own company, while others – including one taking penalty kicks with an invisible football – did what they could to keep minds occupied as the clock ticked down… all the while Linfield spurned chance after chance some 56 miles away. 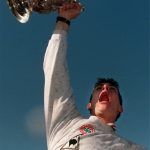 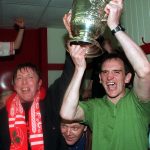 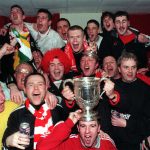 As injury-time at The Showgrounds approached, a deathly hush descended upon Solitude. For the last 60 minutes, seconds had seemed like hours but, suddenly, the dream was on the verge of becoming a reality.

Contemporary television footage captured the scene inside the changing room, where management and players – who had attempted to calm their own nerves with a dubious mix of cigarettes and alcohol – were stunned by an explosive cacophony of noise from the stand and terraces that confirmed Cliftonville’s status as Champions for the first time since 1910.

Their own private revelry abruptly halted, the team emerged to take the acclaim of a delerious Red Army and, with Quinn’s memorable cry of “We’ve done it! We’ve done it!” echoing down the tunnel, he and his players congregated in the middle of the pitch, where skipper Mickey Donnelly took proud receipt of the Gibson Cup and, raised on high by an emotional crowd, held it aloft to officially kick-start one of the most memorable parties in the history of Ireland’s Oldest Football Club.