For it was on April 4, 1893 that the Reds took on Liverpool at Anfield.

The Liverpool Mercury’s report notes that “Only a moderate attendance assembled and, owing to the indisposition of the home team to play the legitimate football, a very tame game resulted”. 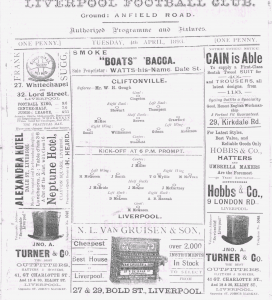 Liverpool – who had just recently won the Lancashire League at the end of their very first season in existence – took the lead when Hugh McQueen netted with a “capital side shot” before John Miller made it 2-0 and, though the hosts were “complete masters of the game”, they were unable to extend their advantage before half-time due to a combination of fine goalkeeping by Cliftonville custodian John Clugston and their inability to resist what was described as “gallery play”.

While the Reds – who could legitimately lay claim to that moniker due to their hosts sporting their original blue and white attire – showed “much more dash and cohesion” after the break, Liverpool raced 3-0 in front when Miller registered his second goal of the game only for Cliftonville to pull one back when Olphert Stanfield converted after “a nice run” by DS Anderson.